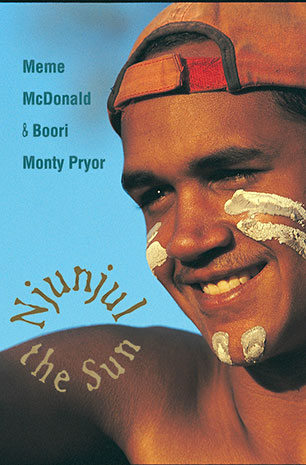 A 16-year-old Aboriginal boy leaves his family and home for the big city, and as he struggles to make sense of his experience he realises that he must have the knowledge of his own people and culture in order to know who he is, and to find his direction.

'I'm heading out on m'own, down the highway to the big city. Going south. I lost my taste for knowing the old ways. I'm wanting what's new. What's exciting, what's out there on the other side of town. That's what got me on this bus. I gotta get out, see. This is my chance. My chance to do something.'

But in the city you can feel like you don't exist any more. You can't always see the sun when it comes up, or lie down safe when it sets. Your mind can go crazy, crammed with everyone else's thoughts, so you can't hear your voice on the inside. An outstandingly honest, original, eye-opening story about a young man daring to step out into a complex world. Njunjul the Sun will make you laugh, even as it grips your heart.

Njunjul the Sun completes the trilogy, begun with My Girragundji and The Binna Binna Man, charting the journey of self-discovery of a young Aboriginal boy as he learns to draw strength from his traditional heritage and to find a way of living in contemporary Australia. The boy is now a young man of sixteen, and he leaves his community in Queensland to live in Sydney. Njunjul the Sun develops the innovative combination of text, photographs and illustrations that was established in My Girragundji.
More books by this author

Meme McDonald was a writer and photographer who created books for young people and adults.

Boori Pryor is from North Queensland. His mother's people are Kunggandji and his father is from the Birra-gubba Nation. Boori is a performer, storyteller and writer.

Meme and Boori co-wrote Maybe Tomorrow (Penguin, March 1998) with Margaret Dunkle as consulting editor. The Binna Binna Man (Allen + Unwin 1999) won Book of the Year at the NSW Premier's Literary Awards 2000. Meme and Boori also co-wrote two prize-winning books which have been adapted for theatre. My Girragundji (Allen + Unwin 1998) had two seasons touring nationally with The Bell Shakespeare Company, and Njunjul The Sun (Allen + Unwin 2002) - which received the Victorian Premier's Literary Award for Young Adult Fiction - was adapted by Kooemba Djarra Theatre Company and produced with QPAC in Brisbane.

Boori Monty Pryor was Australia's Children's Laureate in 2012 and 2013.