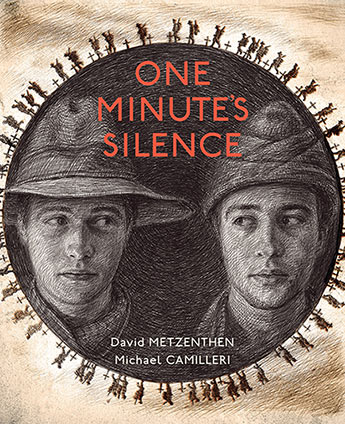 In one minute of silence you can imagine sprinting up the beach in Gallipoli in 1915 with the fierce fighting Diggers, but can you imagine standing beside the brave battling Turks as they defended their homeland from the cliffs above.

In One Minute's Silence, you are the story, and the story is yours - to imagine, remember and honour the brothers in arms on both sides of the conflict, heroes who shed their blood and lost their lives.

A moving and powerful reflection on the meaning of Remembrance Day.
More books by this author

David Metzenthen lives in and loves Melbourne. He is a keen environmentalist and draws ideas from the world at large. Married to Fiona, he has two children, assorted pets, and is a keen fly-fisherman. He hopes always to create work that is well-crafted and gently optimistic.

Michael Camilleri makes picture books, comics, animations and theatre and creatively directs a number of other projects. Past projects include The Practical Guide to Love, Sex and Relationships (watch on youtube), Vienna 1913 (find at Pound Records), and various comics (read at www.epicboy.com). He is currently working on a new picture book for Allen & Unwin and Concept Design for the Museum of Australian Democracy, Canberra. Michael lives in Northcote with his partner Katherine, his son Ruben and a cavoodle called Buster.