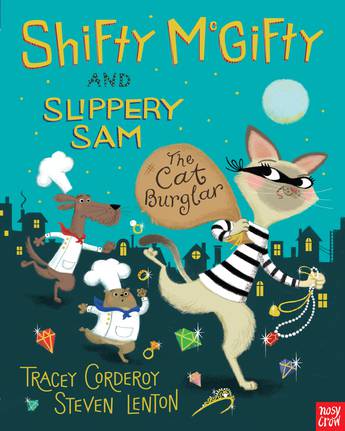 Shifty McGifty and Slippery Sam are the two hapless robber dogs who decided on a career-change after one bungled burglary too many. Now they are back running their own little bakery, but there is a new robber in town - will they be able to stop her and save the day? This paperback edition comes with a free audio reading.

Shifty McGifty and Slippery Sam have swapped a life of crime for baking cakes in their cafe. But now there's a new robber in town - the infamous Kitty-le-Claw! When there's a midnight robbery at the bank, can the two baker dogs save the day? Tracey Corderoy's accomplished rhyme trips off the tongue and makes the message that honesty is the best policy as light and fluffy as a Masterchef's souffle!

Tracey Corderoy was born and grew up in industrial South Wales and now lives in a hidden valley in Gloucestershire with her husband, two children and an ever-increasing menagerie of devilishly-cute-but-sometimes-rather-naughty pets. A trained teacher, Tracey has always had a passion for wonderful literature and began writing for children in 2006. Her books for other publishers include The Grunt and The Grouch series about two riotous trolls, and numerous picture books including The Little White Owl. Tracey's head is happily crammed with countless ideas and stories and she's loving the adventures that her characters insist they share.

Steven Lenton hails from Cheshire where he spent many a school holiday working in the family Pom-pom Factory, packing poms and designing new products. This somewhat fluffy start to his career did no harm though as since leaving the factory he gained a BA and MA in Animation and has become a successful animator and art director within the realms of children's television. Steven also designs greetings cards and prints, selling them online and in various boutiques (shops) and Fayres (Fairs) around the country. Steven's main ambition has always to be a children's book maker and he is very proud to be realising this dream with Nosy Crow. We like to describe his style as charming, contemporary yet warm, with a with a gentle humour.