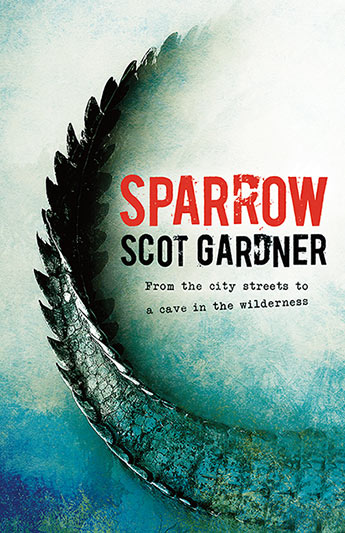 An exceptional and compelling novel from one of Australia's most acclaimed and much-loved authors.

When a juvenile detention exercise off the coast of the Kimberley goes wrong, sixteen-year-old Sparrow must swim to shore. There are sharks and crocs around him but the monsters he fears most live in the dark spaces in his mind.

He's swimming away from his prison life and towards a desolate, rocky coastland and the hollow promise of freedom. He'll eat or be eaten, kill or be killed.

With no voice, no family and the odds stacked against him, Sparrow has nothing left to lose. But to survive he'll need something more potent than desperation, something more dangerous than a makeshift knife.

Hope.
More books by this author

Scot Gardner became a writer after a chance meeting with a magazine editor while hitchhiking in eastern Australia. Magazine articles led to op-ed newspaper pieces and eventually novels. Scot's first fiction for young adults, One Dead Seagull, was published after he attended a writing camp with John Marsden.

More than a decade later, his many books have found local and international favour and garnered praise and awards for their honest take on adolescent life. They include books like White Ute Dreaming, Burning Eddy and most recently Happy as Larry, winner of a WA Premier's Book Award for young adult fiction, and The Dead I Know, winner of the CBCA Book of the Year Award for Older Readers.

Scot lives with his wife and some chickens in country Victoria.

Sparrow by Scot Gardner Excerpt by Allen & Unwin on Scribd