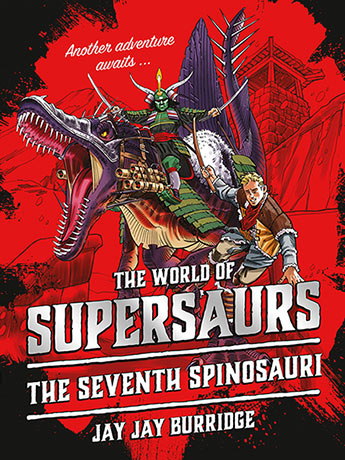 The fifth in the thrilling globe-trotting adventure series where dinosaurs have evolved ... into Supersaurs

Imagine a world where dinosaurs have survived... The fifth adventure in the thrilling global adventure series sees Bea, Carter and Theodore are getting closer to the truth about the shadowy Sauria Trading Company and the Viscount's villainy...

After the revelations of the saur hatchery in the Mexican jungle and the amazing discovery of the lost city of the Saurmen, Bea and Carter Kingsley vow to return to the place the adventure began: the islands of Aru - Carter's birthplace and the final resting place of the children's parents. But the answers they seek are still elusive, and their quest to understand the mysteries of the Saurmen and the powerful keystones takes them next to Japan, where the clues they uncover hint at a secret in the mountains. Meanwhile the Viscount's plans for a large-scale revolution in saur meat farming are on track but he will need to harness the phenomenal power of the Saurmen to fulfil his evil ambitions. Pulling the strings from the headquarters of his organisation in Hong Kong, the Viscount's henchmen are set on a collision course with Carter Kingsley...
More books by this author More books in this series

Jay Jay Burridge studied Fine Art Sculpture at Central Saint Martin's College of Art and Design. For his degree show he made a forty-foot-long, self-assembled dinosaur skeleton out of MDF.

After graduating, in 1994 he took over from the legendary children's TV presenter Tony Hart writing and co-presenting the TV show SMart for the BBC. This grew into three spin-off series and touring live shows. After eight years with the BBC, Jay Jay then turned his attention to a career in commercial art for brands such as Sony, Adidas, and Levis. It was not long before he started up his own custom-made deluxe trucker cap brand, Lucky Seven Caps.

In the summer of 2010 he returned to his favourite subject of dinosaurs and exhibited his supersaurs sculptures in a one-man show in Beverly Hills, LA. The 80,000 square-foot space was filled with 15 full-sized supersaurs. With his friend Jamie Oliver, he co-created the Dinersaur Diner, situated in the heart of Piccadilly Circus.

Jay Jay lives in Oxfordshire with his family.