Home>Browse>Books>Children's>Tashi and the Wicked Magician

Tashi and the Wicked Magician 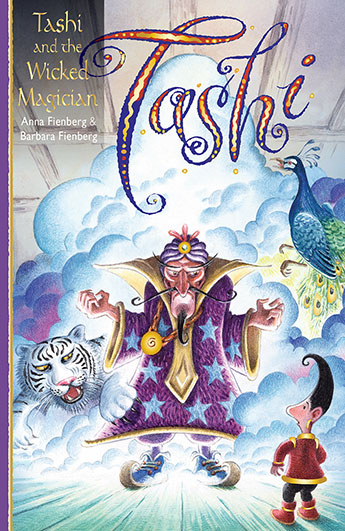 Come with Tashi and his friend Jack on four fabulous adventures of mystery and magic. In this collection, Tashi tells tales of courage and daring, and each story features a beautiful colour illustration.

Tashi is bold and clever, and tells the best stories ever!

There's a Magnificent Magician with a greedy plan, a haunted house about to go up in flames, ruthless ruffians after a rare orchid, and a quest for the bravest person in the land to face the fire-breathing Red Whiskered Dragon.

'All children should meet Tashi. He can be their mentor on the road to reading, feeding their imaginations with fantastic stories.' Magpies
More books by this author

As well as having his own series, Tashi appears in three splendid picture books, illustrated by Kim Gamble: There Once Was a Boy Called Tashi, Once Tashi Met a Dragon and The Amazing Tashi Activity Book. Tashi also appears in his own animated television series, Tashi.

The only thing that spreads faster than a cold through a primary school is the news that there is a new Tashi book out and the library has a copy!

In this new paperback addition to the series, Tashi – that magical little chap who has big adventures – features in five new stories and confronts fearsome opponents set on destroying his village and his peace. This time there’s a magician with a greedy plan, a haunted house about to go up in flames, ruthless ruffians after a rare orchid, and a quest for the bravest person in the land to face the fire-breathing Red Whiskered Dragon.

Originally published in hardback format in 2014, this is a timeless series that continually appeals to those newly independent readers who are stepping out into the world of fantasy. The stories are short, the illustrations colourful and the characters are clearly good or evil.

Back in the days when I was co-ordinating Read Around Australia I ran a book rap based on all the Tashi novels published at the time. Small groups of students selected one story and had to write a synopsis and then pose a series of questions that would challenge the thinking of other students around Australia who had to answer them. What they discovered was that each story threw up a number of ethical questions that could be discussed and debated and so they became so much more than an introduction to fantasy and an easy read. These new stories are similar – is saving the greedy Baron’s treasure a worthy cause worth risking your life for?

If you want to capitalise on the fascination for Tashi, then check out A Flight of Fantasy, a unit of work based on the series and available for free through the National Digital Learning Resources Network. Log into your Scootle account and search for R11582. It’s written for Years 5/6 but can easily be adapted for younger students.

Many will be familiar with Tashi through the series screened on the ABC - they will be delighted to know they can meet him again and share his adventures in the world of print. He even has his own website: http://tashibooks.com/
Barbara Braxton, Teacher Librarian, NSW