That's Not a Daffodil! 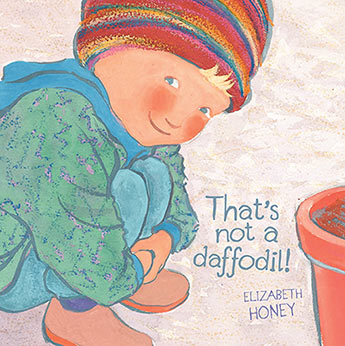 When Tom is given a brown bulb, he says, 'That's not a daffodil! That's an onion.' This is a cheeky and satisfying story with playful repetition and build up of anticipation that will make little children request this story again and again.

When Tom's neighbour gives him a brown bulb, Tom can't believe it will flower. 'That's not a daffodil!' says Tom. 'Well,' says the old gardener. 'Let's plant it and see.'

Elizabeth Honey has created a playful story that little children will enjoy again and again - about an inventive boy, a kindly gardener, a growing friendship and the promise of a bulb.

A stage production of That's not a Daffodil! with music, dance and puppetry was performed at Metanoia Mechanics Institute in Melbourne and at the Kyneton Daffodil and Arts Festival in 2016.
More books by this author

Elizabeth Honey is an award-winning author of poetry, picture books and novels. Her playful humour, originality and energy strike a chord with children everywhere. Elizabeth is also an artist and illustrates her own books.

That's Not a Daffodil! was a 2012 CBCA Book of the Year Honour Book for Early Childhood. It has also been adapted as a musical theatre production.

Her picture books include Not a Nibble!, Ten Blue Wrens, Hop Up! Wriggle Over! and I'm still awake, still!, which features a collection of lullabies. These songs, a collaboration with composer Sue Johnson, inspired a musical theatre production which toured the US and Australia in 2014. Elizabeth's books are published in many countries around the world.