The Coming of the Whirlpool: Ship Kings 1 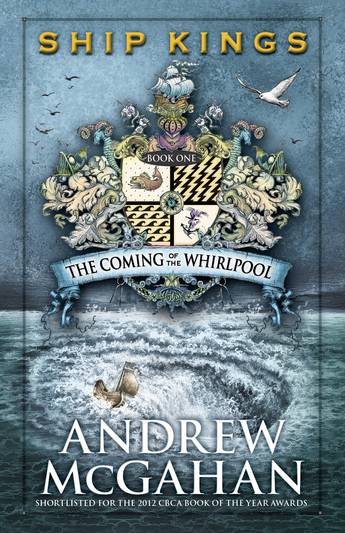 'If you go to sea, you will come to the attention of the Ship Kings. And if they discover who you are, they will kill you.' Young Dow Amber is no sailor. But driven by a strange sea-longing he ventures down to the great grim bay known as the Claw. He hopes to learn there of seafaring, but he finds only a fearful people who scarcely dare sail at all, for they have been cursed by a monstrous whirlpool that haunts the bay, stealing away their sons.

Then the rulers of all the world - the proud and cruel Ship Kings - arrive in the Claw. Dow is fascinated by their fine tall vessels, and even more so by a mysterious girl who lives aboard their flagship.

It is a perilous attraction to be sure, but could it be that his future somehow lies with the Ship Kings? Or will he be called upon to descend to his death, when the terrible whirlpool rises once more?

'Masterful storytelling, elegant prose and a powerful sense of place. The kind of storytelling that stays with you long after the tale has ended' Viewpoint
More books by this author More books in this series

Andrew McGahan is one of Australia's finest writers of fiction. His first novel, Praise, won The Australian/Vogel Literary Award in 1992. In 2004, The White Earth won the Miles Franklin Literary Award, the Commonwealth Writers' Prize, The Age Book of the Year, and The Courier Mail Book of the Year Award. His most recent novel is Wonders of a Godless World. In 2009, Andrew was shortlisted for the Manning Clark House National Cultural Awards for his contribution to Australian Literature. The Coming of the Whirlpool is his first novel for young adults.