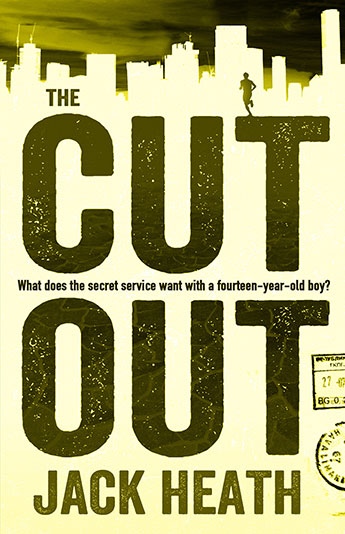 An ordinary teenager's world turns upside down when he's mistaken for a ruthless young spy. An action thriller suitable for readers of Cherub or The Last Thirteen.

But he looks exactly like someone who is: Troy Maschenov - a ruthless enemy agent.

But what starts as a case of mistaken identity quickly turns into a complicated and dangerous plan. Fero is recruited to fight for his country. He will have to impersonate Troy, enter enemy territory, hunt down a missing agent and bring her home in time to prevent a devastating terror attack.

Fero is in way over his head. Hastily trained, loaded up with gadgets and smuggled across the border, he discovers the truth about espionage.

Getting in is easy. Getting out alive is hard.

Jack Heath exploded on the Australian publishing scene as a teenager with his debut novel The Lab which was published to high acclaim. Since then Jack's been published in the US and UK, and shortlisted for numerous awards including the Aurealis Award for Best Sci Fi Novel as well as the Nottinghamshire Best Book Award, and in 2009 was the ACT Young Australian of the Year. Jack Heath's most recent novel is Replica.

Fero is an ordinary teenage boy living in a war torn area near Russia. But his life takes a turn for the far less ordinary when he is mistaken for an enemy agent and arrested. The issue of mistaken identity is resolved but Fero is then forcibly recruited to impersonate the enemy agent and infiltrate enemy territory. He is untrained, green and in way over his head. But he is given helpful gadgets not unlike James Bond’s and a few last minute, hasty instructions. It is a fast-paced, relentless action adventure full of spies, secrets and double-crosses. This is definitely a book that is hard to put down once the reader is into the second chapter. I was grateful for a few long train journeys.

Fero’s character develops well. He is not instantly the superhero but begins in the story as an untrained newbie. However, he is willing to learn and quick-witted. In the story I ‘became’ Fero and actually thought, ‘Oh my GOODNESS!’ a few times especially at the end where the cliffhanger has me hanging out for the sequel: Fail Safe to come out in 2016.

For children aged 9-13 who have already read and enjoyed Cherub, Young Bond and the like, Heath has started writing another series to rival these.
I will find this book very easy to promote to the year 6 to year 8 students at our school, in particular the reluctant male students. The fast-pace will hook them and it is not a long onerous read.
Nova Gibson, Librarian, Massey Primary, NZ

The Cut Out by Jack Heath is a fast paced book with an intriguing storyline that draws the reader in from the very first line and keeps you reading (and breathing hard) right up until the close of the story, 265 pages later.
The protagonist, Fero, is someone who is easy to identify with, with fears and hopes and wants that are common to 14 year olds everywhere. Once you step into his shoes and join him on the journey, there is no going back. The author has excelled himself in creating a character and a scenario that are both compelling and exciting. Fero learns a lot about himself as he goes from ordinary schoolboy to hastily trained spy, and we learn a lot about ourselves and our world, too, seeing his understanding of his world reflected in our own experiences. In The Cut Out, Jack Heath uses an exhilarating tale to illustrate how governments and cultural groups can exploit fear and hatred to further their own aims and political position, and how much of this can stem from a historical event long before the lives of the people caught up in it. As Fero learns that not everything is as he has been taught to believe, so too the reader is able to see the anomalies in belief systems that keep antagonism alive long after the original conflict is over. This makes The Cut Out an excellent book to use to explore the psychology of power with a mature Year 6 or early High School group, and opens up the opportunity to raise questions about the need to conform, loyalty, and beliefs.

Exploring the origins of current world conflicts and terrorism in light of the Besmar-Kamau dispute in The Cut Out provides a forum in which to understand the politics of conflict and its effect on the people who live inside the theatre of war. Or just enjoy an action packed read with a tantalising conclusion, leaving you holding your breath as you wait for Fero’s return in The Fail Safe.
Catherine Whittle, Monash Primary School, ACT

This novel is set in Eastern Europe in the fictional states of Besmar and Kamau. The protagonist is a 14 year old boy, Fero, who is pulled into the world of espionage. Action/ espionage is a favourite genre of mine, but although the setting had potential, I think this novel may fail to capture a young adult audience.

My biggest disappointment was that the characters lacked depth and I didn’t have enough information to engage with any of them. Fero, the protagonist, was portrayed inconsistently: he was introduced as a boy who felt anxious attending a demonstration, while soon after he chose to avoid arrest by being dragged behind a train. His character was just not believable. The plot also included implausible elements, such as Fero only receiving one day of training before being thrown into enemy territory. The twist at the end regarding Fero’s parents was also unconvincing.

Since this was an action novel, I read it quickly and perhaps that is why I found it hard to follow. I didn’t like jumping between the two countries and was frustrated that the backstory about them wasn’t fully revealed. The technological gadgets were nifty but seemed to be propping up the narrative. And finally, I dislike cliffhanging endings which demand the reader buys the next book. I would not recommend this novel as the best example of the genre.
Anne Gray, Teacher, Glen Huon Primary School

The Cut Out is an exciting, fast-paced action thriller aimed at readers 12 years and over. Ten year olds with sufficient maturity and general knowledge may also enjoy it. It is set in Eastern Europe and concerns a teenage boy arrested in a case of mistaken identity. He is then disguised, hastily trained as a spy, decked out with gadgets and sent across the border to find a missing agent and prevent a terror attack. There are chase scenes, close escapes, double crosses and plenty of exciting gadgets. The protagonist, Fero, is innocent but adaptable - he has to be! His mission changes such that he has to think on his feet and soon learns to trust no-one and to rely only on himself.

There is much to discuss with upper primary students, given the themes include mistaken identity, terrorism, xenophobia, conscription and government conspiracy. This book provides a good introduction to discussions of contemporary politics, with many parallels being drawn to countries which have been at war with each other for many years. On a more personal level, students can analyse themes of loyalty and inherited responsibility.

The codes names of the two spy agencies are interesting: The Library and The Bank, as are the technologies and gadgets. Students could make comparisons to real-life technologies and the way people use them. They could also come up with their own spy agency, write a different ending for the book or plan a sequel.
I can see this book translating well to a TV series. A sequel is due out in 2016.
Anthea Barrett, CRT, VIC

Wow! That was quite a read. An unusual theme for a children's novel; the ongoing hostilities between two fictitious Eastern European states and the thrilling exploits of the young operatives caught up in the political gamesmanship. In this book, no one is quite as they seem and nothing can be taken for granted. Carrying on the great tradition of John Buchan, Ian Fleming, John Le Carre and Anthony Horowitz, Jack Heath (if that is his real name!) has created a compelling character in Fero Dremovich that could run for many an intriguing plot.

This would make an interesting class discussion novel on many levels. The effects of war, or the threat of war could be discussed, including the way that propaganda and misinformation can be used to create a distorted impression of the truth to serve the purpose of the political players. Students could research real examples of espionage and intrigue - there are plenty of fascinating stories of real exploits.
This novel would also make an interesting creative writing start point; a challenge for students to write a thrilling piece, with as many twists, turns and impossible escapes as they can imagine.
I really enjoyed and highly recommend this book.
Debbie Williams, Library Technician, Mountain District Christian School, VIC