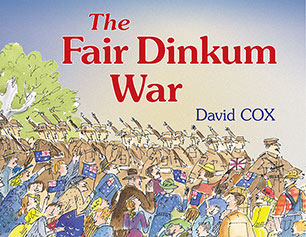 Artist David Cox recalls what it was like to be a child during World War Two, and his warm observations reveal a resilient quintessential Australian spirit. A companion to his much loved picture book The Road to Goonong.

That morning, something important happened. It began with a great rumble that came in through our classroom window and rumbled on and on. We all ran out into the school yard and hung on the fence and gazed in wonder. An endless line of trucks and jeeps and tanks and weapons carriers came around the corner and along our street, all of them with big white stars on their sides. There were big cannons, too. Soldiers in the trucks waved to us. We wouldn't have guessed there were so many trucks in the whole wide world. They rumbled right through the morning break and when we came out for lunch they still rolled by. Then they were gone, heading north to where the war was being fought.

Praise for The Road to Goonong - 'every page is full of action and humour' - Magpies, 'breathes authenticity and is to be treasured as a rare gift' - Reading Time
More books by this author More books in this series

David Cox grew up in outback Queensland. At age twenty-one, David went to St Martins School of Art in England. While in his first year at the school, he was offered his first book illustration commission. When he eventually returned to Australia, he worked as an artist in the newspaper industry. He also wrote articles, book and art reviews and designed theatre sets and costumes. In 1978, he was awarded the Walkley Award for newspaper illustration.

David's writing and drawing for children began in the 1960s and some of his books have won awards and citations in Australia and in the USA, including Ayu and the Perfect Moon and The Drover's Dog. His illustration style is characterised by spontaneity and wit, and he has illustrated many books written by other people. In 2007 he was awarded the Dame Isabelle Rankin Award for distinguished services to Children's Literature in Queensland.