Anh Do and Suzanne Do, illustrated by Bruce Whatley
AUD $24.99
Discount:
Price / COM_VIRTUEMART_UNIT_SYMBOL_: 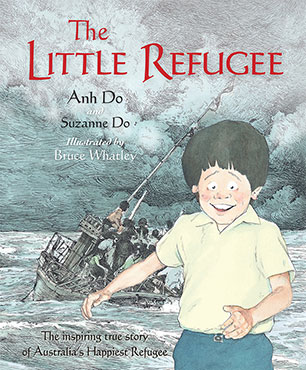 Anh Do's inspirational story about his family's incredible escape from war-torn Vietnam and his childhood in Australia, told especially for children.

Giant waves crashed down on our little boat. I was terrified but my mum hugged me tight and told me, 'Everything will be okay. Don't worry, it will be okay.'

Anh Do nearly didn't make it to Australia. His entire family came close to losing their lives as they escaped from war-torn Vietnam in an overcrowded boat. It was a dangerous journey, with murderous pirates and terrifying storms, but they managed to survive. Life in suburban Australia was also hard for a small boy with no English and funny lunches. But there was a loving extended family, lots of friends, and always something to laugh about for Anh, his brother Khoa and their sister Tram. And eventually for a young Anh, who tried hard to see the bright side of life no matter what the difficulty, there was triumph. Awarded an Honour Book in the 2012 Children's Book Council of Australia Book of the Year awards, The Little Refugee tells the uplifting and inspiring childhood story of one of Australia's favourite personalities.

'Awesome. I sort of liked how it was sad in the beginning but it was happy in the end.' - Sinead, aged 7

Anh Do is one of Australia's leading comedians. He has also acted in television series and films, written screenplays and is a sought-after keynote speaker. His unique and inspirational experience leaving Vietnam as a toddler and growing up in Australia is the subject of his bestselling and award-winning memoir, The Happiest Refugee.

Bruce Whatley is one of Australia's best-loved and most respected author/illustrators. His books include the enormously successful and award-winning Diary of a Wombat, written by Jackie French, and its companion volumes, The Secret World of Wombats and Baby Wombat's Week. The best-selling team have also collaborated on Pete the Sheep, Josephine Wants to Dance, Queen Victoria's Underpants and The Shaggy Gully Times. Bruce has illustrated over forty books to date, including Monster written by Andrew Daddo and a number that he has co-written with Rosie Smith.