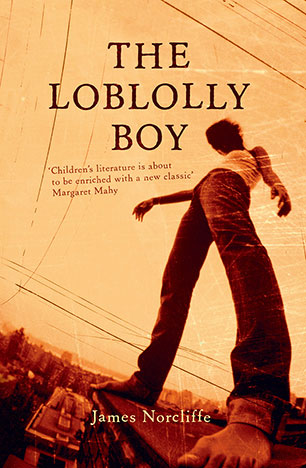 A gripping story about a boy who gains the power of flight, but loses touch with what makes him human. Is the cost of being a loblolly boy too high? Find out in this beautifully written novel for lovers of fantasy.

When he turned around I could see the spread of the feathery green wings that sprouted from his shoulders, beautiful waving wings. I felt as if I were suddenly on a different planet. Part of me wanted to drop to my knees. 'Who are you?' I gasped.

The loblolly boy has the gift of flight. He is invisible to most people, apart from the Sensitives; is much coveted by the sinister Collectors; and he has the power to Exchange - to swap identities with others. But the children who choose to Exchange - often to escape very miserable lives - soon realise that to become one of these magical, Peter Pan-like creatures brings complications and dangers they never anticipated.

'The children in The Loblolly Boy find themselves caught up in a remarkable chain of events. Through an encounter with the fantastic loblolly boy they can become fantastic themselves. This is a rich fantasy - alive with original twists, surprises and mysteries which I dare not reveal. Children's literature is about to be enriched with a new classic.' Margaret Mahy
More books by this author

James Norcliffe is a Christchurch-based, award-winning poet with six collections published, and five novels for young adults. The Assassin of Gleam won the Sir Julius Vogel Award for the best New Zealand fantasy novel of 2006, and was shortlisted for the Esther Glen Award. James teaches in Lincoln University's Foundation Studies department, and lives with his wife Joan Melvyn and an ungrateful cat called Pinky Bones in Church Bay, on Lyttelton Harbour.