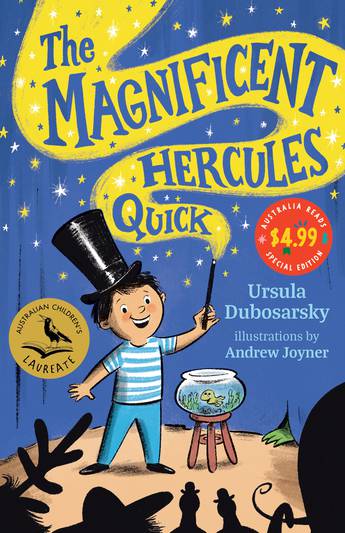 An Australia Reads exclusive story about a boy who does a series of odd jobs for his eccentric neighbours, from the current Australian Children's Laureate and the bestselling creators of The Terrible Plop.

Hercules Quick dreams of being a magnificent magician. He is saving up to buy a box of magic tricks. Luckily, he has plenty of neighbours who need his help. Whether it's lending a hand to Professor Calamari or doing an out of season spring-clean for Queen Claude, no job is too odd for Hercules.

A hilarious story about an ordinary boy who does a series of odd jobs for his eccentric neighbours, from the bestselling creators of The Terrible Plop. An Australia Reads exclusive story.
More books by this author

Ursula Dubosarsky was born and grew up in Sydney and wanted to be a writer from the age of six. She is now the author of over 60 books for children and young adults, and her work is published all over the world. She has won several national literary awards, including the NSW Premier's Literary Award a record five times, and internationally she has been nominated for both the Hans Christian Andersen Award and the Astrid Lindgren Memorial Prize. Ursula Dubosarsky is the current Australian Children's Laureate.

Andrew Joyner is a highly acclaimed picture book creator who has illustrated many of Ursula Dubosarsky's picture book texts to great success. Together they have won and been short-listed for many awards, including the CBCA Awards and children's choice awards. Andrew's books have been published in more than twenty-five countries. He lives in South Australia with his family.