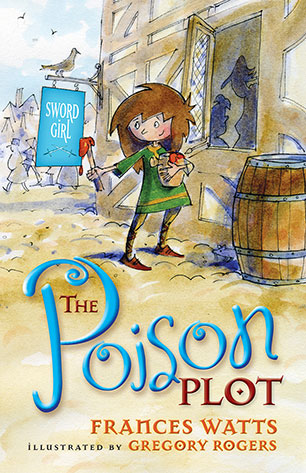 The second adventure in the Sword Girl series featuring the feisty Tommy. Evil plans are stirring and it's up to Tommy to keep the peace at Flamant Castle!

While on an errand to the smith in the town, Tommy overhears a plot to poison Sir Walter during a banquet and make it look like the work of a neighbouring nobleman. Tommy must foil the plot or Flamant Castle will be at war.

rances Watts was born in Lausanne, a small city in the French-speaking part of Switzerland, and moved to Sydney when she was three. She spent nearly ten years working with some of Australia's most talented children's authors and illustrators before writing a book of her own, Kisses for Daddy, illustrated by David Legge. Their second collaboration, Parsley Rabbit's Book about Books, won the Children's Book Council of Australia's Eve Pownall Award. Her picture book Goodnight, Mice! (illustrated by Judy Watson) was awarded the 2012 Prime Minister's Award.