Home>Browse>Books>Children's>The Princess and the Shoe

The Princess and the Shoe 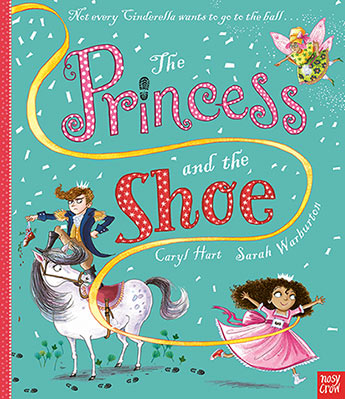 A sporty reimagining of Cinderella for any princess (or prince) who prefers muddy trainers to glass slippers.

Princess Jasmine is not like her stepsisters. She hates long dresses and sitting still and would much rather take part in the big cross-country race. So, when a fairy godmother appears with a new pair of speedy magic trainers, well, it looks like her dream has come true! That is, until she loses one of her trainers ... how will she even finish the race? But when she goes on to WIN, was it the magic trainers or was it Jasmine's determination and belief in herself?
More books by this author

Caryl is a full-time children's writer, who also runs creative workshops with local schools. Her first picture book, Don't Dip Your Chips in Your Drink, Kate! won two regional awards, and was shortlisted for a third. Her Princess series, illustrated by Sarah Warburton, has sold over 220,000 copies worldwide. She lives in the Peak District with her guitar-playing husband, two cheeky daughters, one extremely fluffy black cat, a goldfish, four hens and a dog called Roo. As well as writing, Caryl loves walking in the hills, swimming, snuggling, baking, weeding, running, sleeping, chatting, and sitting in cafes.

Sarah grew up in Anglesey, North Wales. She studied illustration at the University of the West of England, in Bristol, and hasn't looked back since. Sarah has created many books, working for a large variety of publishers, including illustrating the Rumblewick series, which has sold worldwide and is under movie option with DreamWorks. Her Princess series, written by Caryl Hart, has sold over 220,000 copies worldwide. Sarah lives in Bristol with her husband, two children and a grumpy guinea pig.