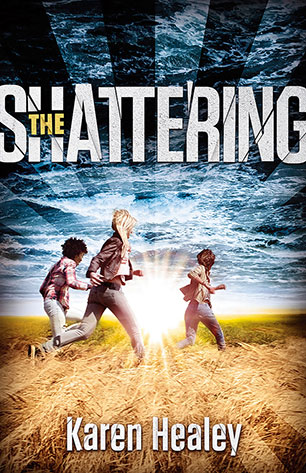 Keri, Janna and Sione have two things in common: they each have an older brother who committed suicide, and they each have a connection with Summerton. As the three teenagers delve deeper into the mystery they uncover secrets that will shatter everything they thought they knew.


I had a plan for what to do if a member of my family was murdered. It went: 1) Find the killer. 2) Make sure they were guilty. 3) Destroy them. Completely.

Summerton is perfect: gorgeous weather, stunning scenery, cute out-of-towners to hook up with. But sharp-tongued Keri is immune to her hometown's charms. Her older brother's sudden death has left her shattered by grief and with too many unanswered questions. When Keri discovers that childhood friend turned rock-chick Janna and seriously smart rich-boy Sione have also lost brothers in unusual circumstances, she begins to suspect that sunny Summerton holds some very dark secrets. As the three investigate, the answers they uncover become more and more frightening. Can the teenagers save Summerton's next victim? Or will they succumb themselves to its strange summer magic?

Karen Healey, a New Zealander living in Australia, is the author of the critically acclaimed Guardian of the Dead . She likes sundresses, researching world-ending apocalyptic scenarios, and books about lady spies. She doesn't like library fines.

‘Janna van der Zaag walked up to me and said, “If you want to find out who murdered your brother, follow me.”' On the west coast of New Zealand, Summerton’s ethereal beauty holds its residents captive, but every year one of its young men takes his own life. The most recent death is that of Keri’s brother, Jake. Sports-mad Keri can’t accept that her brother committed suicide. When would-be rock star, Janna, and Sione, a rich boy from the north, suspect that their brothers have been murdered, Keri wants to help. The trio set about finding the killers and saving Takeshi, a Japanese exchange student, whom they realize is to be the next victim. Suspecting the local police are involved, the teenagers plan to enact their own justice. In the process, they discover that Summerton’s hypnotic effect belongs to witchcraft, and that they are not immune.

The Shattering points to the devastating consequences of suicide for those who are left to mourn and wonder if such drastic action might have been prevented. The story rotates through the viewpoints of the three protagonists, although only Keri’s is told in the first person. Another strong theme is sexual identity as each character seeks the kind of relationship that makes him or her happy. Unfortunately, I found this novel too plot-driven and cluttered with a confusing array of secondary characters. At times, the author’s voice intrudes, telling the reader what to think: ‘He couldn’t believe he’d outed Keri, couldn’t believe he’d called Janna a whore. Exactly as if he were like those people who thought that being gay or having sex was bad, when he knew much better.’ The explanation of the boys’ deaths as motivated by black magic undermines the seriousness and complexity of the suicide issue. I did not engage with this book, however, those who are interested in stories with supernatural themes may find it entertaining.
Sharon Hammad, Winmalee, NSW

This novel kept me on the edge of my seat guessing until the end. This is a new thriller by Karen Healey (author of Guardian of the Dead). It is set in Summerton, a fictional small west coast town on the south island of New Zealand. Summerton has a stable population and is a sleepy coastal town for most of the year. However every summer thousands of tourists arrive to enjoy their holidays. The great natural beauty of the place is admired and the view out over the sea is known as the “Summerton Effect” because people just can’t stop starting at it. The thriving tourist trade is enjoyed by all the residents and businesses at this time of the year. Everyone has a job and all the teenagers look forward to the parties and events that the town organises, giving them the opportunity to meet new friends and have summer romances. Other towns along the coast don’t do nearly so well. In fact many of them are dying. Is it just the “Summerton Effect” that keeps the tourists coming and the town alive, or is something more sinister happening?

Three teenagers Keri, Janna and Sione have all suffered the deaths of older siblings in recent years. Sione has an interest in statistics and has discovered an alarming pattern related to the deaths of their siblings and others. All are young males; all are older brothers and all died after being in Summerton for New Years Eve. Even more alarming is the fact that all the deaths have been determined to be “suicides”. Also over the last ten years no-one has left Summerton permanently and no-one has moved into Summerton permanently. People come and go, but even divorced couples stay in the town, bumping into each other at the supermarket and occasionally sleeping with each other, much to the disgust of their children.

The story is first told from the point of view of Keri, a young, female, 17 year old student, who is also a fit rugby player, good at school and in agony over the death of her older brother, Jake. Her mother works at the top tourist hotel in the town and has cancelled Christmas, because of Jake’s death. Each successive chapter takes up the narrative from the point of view of a particular character. The chapters are titled accordingly. Janna is a brilliant bass player and has ambitions to be a pop star, her older brother Schuyler, “killed” himself. She dresses “like an evil debutante”. Sione is Samoan and struggles with the death of his older brother Mathew and his love for Janna. The three teenagers continue to investigate and uncover some more alarming coincidences. Adults that they both suspect and trust are implicated. Murder becomes a possibility and then a fact.

Each character has unique and endearing qualities and it is easy to sympathise with their feelings and the teenage romances that blossom, as well as their courage and sense of justice and honour that compels them to find out what happened to their older brothers. As the trail starts to become hot, they willingly risk their lives. They suffer a series of almost fatal accidents and attract the attention of some rather sleazy characters who dabble in witchcraft and magic. I found this fascinating and intriguing. A great read for older teenagers and adults who enjoy murder mysteries with a difference and a twist, reminiscent of Midsommer Murders without the detective. I would recommend this for Senior English and Independent Reading tasks.
Ms Briony Monahan, William Light R-12 School, South Australia

What do you get when you have a perfect town, friendly local and a connection of young men committing suicide? A mystery of terrifying proportions! The story takes place in Summerton, a pretty coastal town in New Zealand. It is always sunny even when the surrounding towns and areas are drenched in rain. Keri has been left devastated by her brother’s suicide. When she meets up with her former best friend from primary school, Janna, she is introduced to Sione, whose own brothers have also committed suicide. Sione makes the connection that the suicides were not coincidences, but they were murdered and the town of Summerton had something to do with it. As Keri, Janna and Sione investigate further, the answers they try to find only get more intriguing and dangerous. Why have all these young men committed suicide, what’s their connection with Summerton and can Keri, Janna and Sione prevent it from happening again to someone else’s brother?

This is a great book for more mature readers and fits in with the young adult fiction genre, for those who like a supernatural slant in the books that they read. The topic of suicide can be controversial, especially with what is occurring in our communities at the moment, but the author has kept it simple and without bias and the attention to grieving families of when a person does commit suicide is well written and sympathetic. This is a fast paced book that will keep the reader interested until the end. There is a great twist which keeps the reader wondering and questioning long after reading the book.
Alison Hay, Yarra Hills Secondary College, Victoria

This is the second novel from Ms Healey and again she uses her homeland of New Zealand as the setting for a mystery/ fantasy fiction story. Summerton is too perfect in scenery and weather, except for the dark secrets surrounding a number of young male suicides. As I’ve just visited New Zealand, I can see this seaside resort on the North Island around either the Bay of Plenty or the Bay of Islands; beautiful one day, perfect the next. The author creates plausible young adult voices in Kerri, Janna and Sione. As three narrator voices tell the unfolding story from their viewpoints, the web of mystery tightens around each of them.

I feel The Shattering would engage YA readers from capable Year 7s to Year 10s. And would work well as a class novel around Year 9 English with the theme of preventing and understanding youth suicide. All school libraries should have a copy, especially in New Zealand. The final note from the author giving hope and contacts to those who feel bullied, desperate and in danger of self-harming are praiseworthy.
The Samoan and Maori glossary of terms are helpful also. If you have missed her earlier novel, Guardian of the Dead, I highly recommend reading and using this title also in the classroom and school library.
Susan Hill, NSW