The Skeleton Coast: Quest of the Sunfish 3 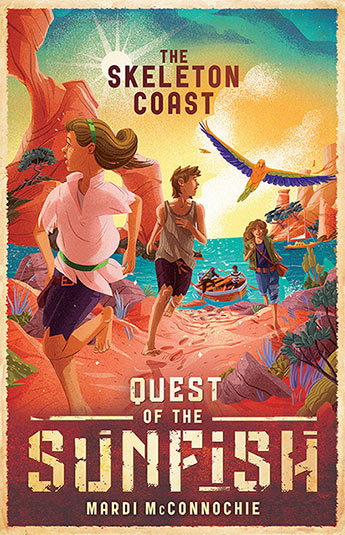 The adventures of the Sunfish conclude as twins, Annalie and Will, discover the truth of what was behind their father's disappearance and face even more dangers on land than they did at sea.

Annalie and Will's father, Spinner, is still on the run from the Admiralty. With their friends, Essie and Pod, and the talking parrot, Graham, their journey has taken them through dangerous waters, ferocious storms and marooned on abandoned islands. They've come heartbreakingly close to Spinner, only to be driven apart once again by their old nemesis, Beckett. While the Sunfishcrew loses precious days to yet another pirate attack, Spinner is fleeing south, to the mysterious land of Sundia.

Now, the terrifying emptiness of the Outer Ocean lies between the Sunfish and Spinner. Even if they manage to cross it-with Beckett still hot on their tail-Sundia is a land forbidden to all outsiders. What awaits them beyond Sundia's Skeleton Coast-the greatest danger they have yet faced, or answers and journey's end at last?

The thrilling conclusion to the Quest of the Sunfish series.
More books by this author

Mardi McConnochie is the author of four previous adult novels: Coldwater-shortlisted for the Commonwealth Writer's Prize First Novel Award (Pacific region)-The Snow Queen, Fivestar and The Voyagers. She has also written two novels for younger readers, Melissa, Queen of Evil-winner of an Aurealis Award-and Dangerous Games. Her TV scriptwriting credits include Home and Away, McLeod's Daughters, Always Greener and Pacific Drive. She lives in Sydney with her partner, James Bradley, and their two daughters.