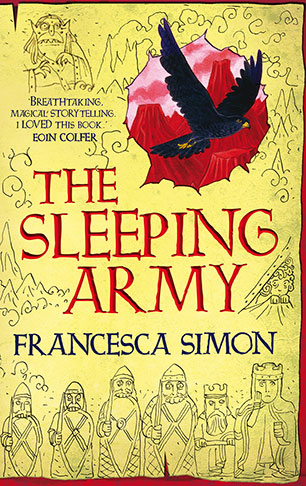 From one of the bestselling children's authors in the world comes a funny and action-packed place-slip adventure, featuring a feisty young girl.

Freya is an ordinary girl living in modern Britain, but with a twist: people still worship the Viking gods. She's caught in her parents' divorce, and shuttling between bickering adults is no fun. One evening, stuck with her dad on his night shift at the British Museum, she is drawn to the Lewis Chessmen and Heimdall's Horn. Unable to resist, she blows the horn, waking three chess pieces from their enchantment; the slaves Roskva and Alfi, and Snot the Berserk. They are all summoned to Asgard, land of the Viking gods, and told they must go on a perilous journey to restore the gods to youth.

Francesca Simon is universally known for the staggeringly popular Horrid Henry series. These books and tapes have sold over 15 million copies in the UK alone and CITV have made a hugely popular cartoon series based on the nation's favourite naughty boy. Horrid Henry Robs the Bank was shortlisted for the Children's Book of the Year award at the 2009 British Book Awards, the third consecutive year of nomination, following a win in 2008. She lives in North London with her family.