The Song of Lewis Carmichael 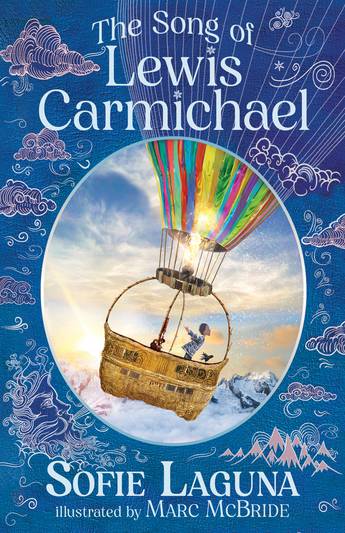 A beautiful, illustrated adventure story with a classic feel, about a quiet boy and a talking crow on an extraordinary hot-air balloon ride to the Arctic.

Matthew stood on the snowy peak and stared out at the world spread before him. Every picture in his books had been limited by the size of the page, contained within frames. Here, there was no frame. Here, the picture didn't end. Beyond those icy plains, the sea, and beyond the sea, a land that floated on the ice, drifting northwards. Matthew put the binoculars to his eyes and saw valleys and cliffs and rivers all made of snow. Everywhere was white.

Matthew has dreamed and read and thought about the North Pole for as long as he can remember. And he has done it secretly. It is a place that cannot be tarnished by the world in which he lives - a world in which he struggles to find answers and make friends, while everything seems to come easily to other children.

But one day, a crow called Lewis Carmichael lands at Matthew's window - a crow who believes in Matthew in the most simple and ordinary ways. Soon, the unexpected voyage of a lifetime begins, and it will change everything…

SOFIE LAGUNA's many books for young people have been published in the US, the UK and in translation throughout Europe and Asia. She has been shortlisted for the Queensland Premier's Awards, and twice been awarded Honour Book by the Children's Book Council of Australia (CBCA). She is also a highly acclaimed author for adults. Sofie lives in Melbourne with her husband, Marc McBride, and their two young sons.

MARC McBRIDE is the illustrator of Emily Rodda's New York Times bestselling Deltora Quest series, which has sold over 18 million copies worldwide and has become an anime TV show. He has illustrated more than 200 book covers and 10 picture books, including writing and illustrating World of Monsters. Marc has exhibited with the New York Society of Illustrators' international show, been shortlisted for the CBCA Awards and Aurealis Awards, and has won the Aurealis Awards twice.

The Song of Lewis Carmichael by Sofie Laguna, illustrated by Marc McBride by Allen & Unwin