The Unforgettable What's His Name 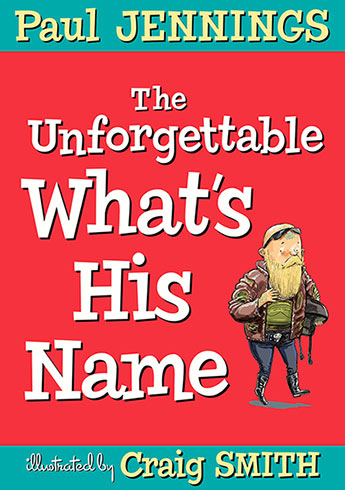 Now you see him, now you don't - an action-packed adventure about a boy who just wants to blend in, from a bestselling author/illustrator team.

Even before all this happened I had never been like the other kids. I tried not to be seen. If I climbed a tree or hid among the bins, no one could find me. 'Where's What's His Name?' they'd say.

Then, one weekend, I got what I wanted. First, I blended in with things. But on the second day I changed.

The hilarious story of a boy with an unusual problem, from children's book legend Paul Jennings. Includes fantastic look-and-find colour illustrations.
More books by this author

Paul Jennings has written over one hundred stories and has won every Australian children's choice book award. Since the publication of Unreal! in 1985, readers all around the world have loved his books. The top-rating TV series Round the Twist and Driven Crazy were based on a selection of his enormously popular short- story collections such as Unseen!. In 1995 he was made a Member of the Order of Australia for services to children's literature and he was awarded the prestigious Dromkeen Medal in 2001.

Craig Smith is one of Australia's most prolific children's book illustrators, with over 380 books published. He has collaborated with many of Australia's best-loved authors, including Paul Jennings on the Cabbage Patch series. Craig's work over the last thirty years has been acknowledged in the Children's Book Council of Australia (CBCA) Book of the Year awards, as well as in children's choice awards around Australia. In 2011, Craig was awarded the biennial Euphemia Tanner Award, which recognised his distinguished services to children's literature and his encouragement of the joy of reading in children.