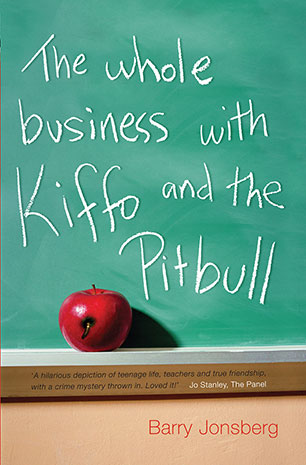 I don't know you at all. I wouldn't recognise you from a hole in the ground. If I was telling this story to some friends, then they would already know Kiffo and they would know me and they would know the school and everything. I'd just be able to get straight into what happened when a new English teacher, the Pitbull, slobbered and snarled her way into our class. But you don't know anything. No offence.

Barry Jonsberg is an English teacher, originally from the UK but a resident of Darwin since 1999. He has two degrees in English and was Head of Department at the South Cheshire College in Crewe, Cheshire, UK. The Whole Business with Kiffo and the Pitbull was his first young adult novel. Its sequel, It's not all about YOU, Calma, (2005) won the 2006 South Australian Festival Award for Children's Literature.