Home>Browse>Books>Children's>This Zoo is Not for You

This Zoo is Not for You 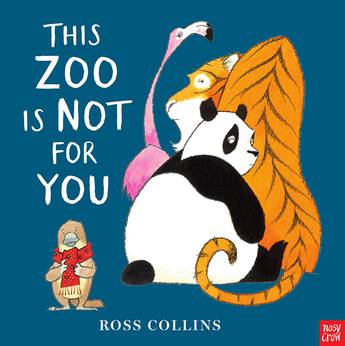 Who knew a trip to the zoo could cause such a hullabaloo? This paperback edition comes with a free audio reading.

When a small platypus visits the zoo, the animals all assume he has come about the vacancy and he is swiftly taken through a rigorous interview process. But the platypus is far too bland for the chameleons, not nearly graceful enough for the flamingos, and his tricks will never impress the monkeys. So, he leaves. The animals soon regret being so unkind, but... what's this? The platypus has left an invitation! Oh dear - it seems he had actually come to the zoo to invite them all to his party. Uh-oh! But with all forgiven and forgotten, the platypus welcomes his new zoo friends to a fantastic party on his Platypus!

This rollicking rhyming picture book, from the award-winning creator of There's a Bear on My Chair, combines comic misunderstandings with a heartfelt story about acceptance and belonging.

'There's a touch of Tim Minchin about Collins... his tone is funny but heartfelt and a little bit rock'n'roll' - Guardian

This paperback edition comes with a free audio reading featuring music and using children's voices - accessible anywhere and anytime you're connected to the internet by scanning a QR code on your smartphone or tablet.
More books by this author More books in this series

Ross Collins's primary 1 teacher, Mrs Spears, told his parents that he should go to art school. 13 years went by until he was finally 'old enough' to get into the Glasgow School of Art. Can you believe that? - 13 years. On graduating he won the Macmillan Prize for his first picture book. Since then he's illustrated over 100 books for children and written a few of them too. Several of them have won enormous glittering awards which he keeps in a box in Latvia. Ross's book The Elephantom was recently adapted into a critically acclaimed play by those clever people at the National Theatre who made that War Horse thing. When he's not creating children's books he enjoys working on character development for animation studios like Laika and Disney. He also likes walking in the Scottish glens with his dog Hugo, who is an idiot, and his partner Jacqui, who is not.