Home>Browse>Books>Children's>Tiger, Tiger, Burning Bright! - An Animal Poem for Every Day of the Year

Tiger, Tiger, Burning Bright! - An Animal Poem for Every Day of the Year 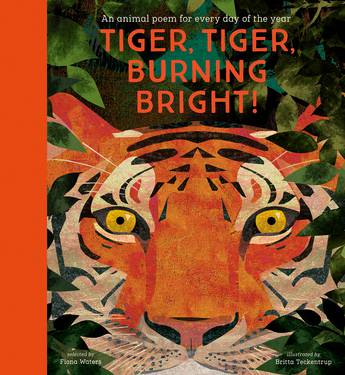 A breathtaking, illustrated anthology featuring an animal poem for every day of the year by award-winning artist, Britta Teckentrup.

This lavishly illustrated collection of 366 animal poems - one for every day of the year - ranges from unforgettable classics to contemporary works from around the world, including poetry in translation.

Britta Teckentrup's breathtaking illustrations bring together all the richness and wonder of the animal kingdom, making this anthology a perfect gift that will be treasured by generations.
More books by this author More books in this series

Once upon a time long, long ago, Fiona Waters was born in Edinburgh and she has had her nose in a book ever since. When she was about seven she heard Gabriel Woolf reading 'The Lady of Shalott' on the radio and from that moment she was hooked on poetry forever. Fiona has worked with children's books all her life as a bookseller, publisher, author, reviewer and latterly as the Editorial Director of Troubadour, choosing the books for book fairs in schools. Now retired, she has been travelling to all the fairytale places she dreamt of as a child, like Russia and Japan, reading even more books with her two cats and still very much enjoying compiling anthologies.

Britta Teckentrup grew up in a town called Wuppertal. She moved to London in 1988 to study illustration and fine art at St Martin's College and the Royal College of Art and ended up staying in England for 17 years. Britta has created over 30 books, translated into 20 different languages. Britta's illustrations have appeared in magazines, on homewares, clothes and packaging. Britta now lives and works in Berlin with her artist husband, young son, Vincent, and their cat.