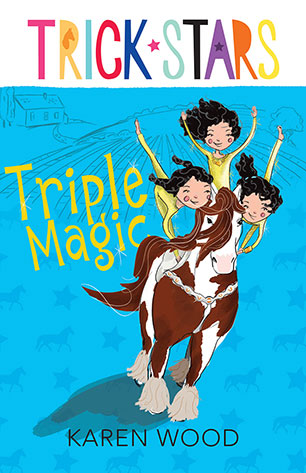 Book 1 in an exciting series featuring fantastic trick-riding triplets from the creator of Diamond Spirit.

A Trickstars Adventure with Ruby, Lexie and Kit, the fantastic trick-riding triplets

Ruby and her sisters dream of a life far from Windara Farm, performing spectacular tricks on their beautiful gypsy cob horses. Then Ruby discovers an old trunk in the stable loft, full of family secrets and a touch of magic. Why has Grampy kept the past hidden for so long? Will he allow the triplets to follow in the stirrups of their ancestors?

Karen Wood is a mother of two and the author of the popular Diamond Spirit books, as well as rural romance books, Jumping Fences and Rain Dance. She is mad about horses but is also a qualified horticulturalist with a degree in Communications. She has a menagerie of animals on her small acreage in New South Wales and spends her free time with her children and horses.

Identical triplets Ruby, Lexie and Kit Trickett dream of leaving Windara Farm performing spectacular tricks on their beautiful gypsy cob horses. It’s a dream that’s a far cry from the vegetable-growing district around Kulnara where the girls live on their grandfather’s farm. But their horses Tinker, Kismet and Featherfoot are workhorses and Grampy is not a wealthy man. However things change when Ruby climbs into the loft to look for some old horse rugs to keep the horses clean and discovers a mysterious trunk. Its lid is painted blue with gold stars and a silver moon and there is a hand-painted picture of a horse with two riders standing on its back – very much like her dream. And written on the lid is “Gallius and Levinia Trickett”, her grandparents.

Ruby doesn’t know it but this discovery unleashes family histories and secrets that become the impetus for this new series written for newly independent readers from about 7-10. Mix dreams, sadness, and intrigue with horses, acrobatics, magic and characters that appeal and there is a formula for a series that will appeal to girls who love reading and horses. There are six in the collection (Chasing Dreams and Princess of the Sands are published this month) each building on the previous episode. I predict they will be warmly welcomed and eagerly read as young ladies put themselves in the saddle alongside Ruby, Lexie and Kit and share the dream with them.
Barbara Braxton, Teacher Librarian, NSW

The Trickstars Adventure series is six books about triplets living on Windara Farm and the adventures they have. The stories are simple but the chapter style of the book make them accessible to beginning and established readers. It is a series that girls rather than boys will pick up because of the horse ownership story line and the fact that the three main characters are girls. The story is classic in that there is a problem and excitement builds before the resolution. The reader must keep reading to find out how the story will end. This is not your Saddle Club type of story about horse ownership however, having magic as a key component. Also the characters are strong and modern which is sure to engage many readers.

It is interesting the way the author has introduced the characters in the first book and then spent the next three focusing on each of the characters and developing our knowledge of them. It means that readers will have a favourite book- the one that is about their favourite character.

An advantage for teachers is that they can recommend the first book Trickstars Triple Magic and know that if it interests their student they have another five books they can pass on. This is always a great hook to use with reluctant readers. There aren’t any illustrations except for the small pictures at the beginning of chapters. They do tie into the action in the coming chapter.
This series will be a favourite with mostly girls from ages 7-12 years.
Roxanne Steenbergen, Windermere Primary School, TAS