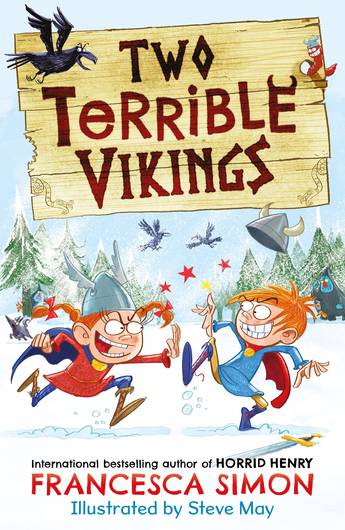 This viking duo will give Horrid Henry a run for his money!

Francesca Simon had so much fun writing about two truly awful vikings she has decided to take the pair, now older, on further adventures - pitching the stories squarely at the Horrid Henry readership. Set in the snowy fjords of a Viking kingdom, the terrible pair are adored by their proud parents for causing havoc and demonstrating that they are the very best worst vikings. But of course, behaving appallingly often goes wrong: getting lost and ransacking their own village by mistake, ruining birthday parties and upsetting your friends . . .

With whip-smart dialogue, and accompanied by Dennis the Menace style anarchic cartoon imagery, this series is as sharp, funny and compelling as you would expect from the reigning Queen of Comedy.
More books by this author

Francesca Simon is universally known for the staggeringly popular Horrid Henry series. These books and CDs have sold over 20 million copies in the UK alone and are published in 27 countries. Horrid Henry and the Abominable Snowman won the Children's Book of the Year award in 2008 at the British Book Awards. She is also the author of Costa-shortlisted The Monstrous Child and Hack and Whack, her first picture book. She lives in North London with her family.

Steve May is an animation director and illustrator. Steve has illustrated books by Jeremy Strong, Philip Reeve, Harry Hill and Phil Earle, as well as the Dennis the Menace series. He lives in North London.