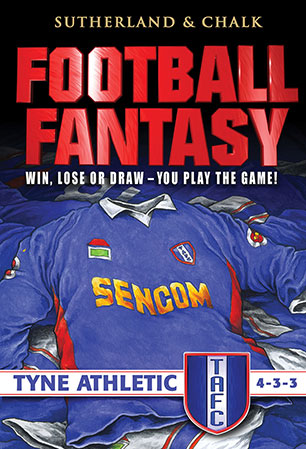 Download cover
Availability: Not available to order from this website, please try another retailer
The first and only interactive sports books in the world. Fun, easy to play, innovative and exciting - designed for one or two players.

Football Fantasy is a stunning new series of football gamebooks in which YOU control the outcome of the match. YOU choose the tactics, whether to attack or defend, find the opponent's weaknesses and dominate the game.

YOU can play the game solo, or with another player. Create your own leagues, cups and competitions. This revolutionary new series puts YOU on the pitch, you see what a footballer would see and make decisions he would make. View the pitch from over 240 different illustrations and see the results of over 8500 possible options!

Simple to play, challenging to master and every game is different - no match is the same.

Play the game anytime, anywhere, solo or with another player. Learn the tricks and tactics of the game and lead your team to victory!

Carlos Delgardo, 2002's Player of the Year, and pin-up Kieron Flynn lead the attack for this North-Eastern side. Can YOU rely on the safe hands of Bob Brand to keep a clean sheet? This is an exciting team with French, Spanish, Italian and English internationals playing a 4-4-2 formation. Tyne FC is a frequent top five finisher, but recent glory still seems to elude them. Can YOU get the best out of the Tyne FC squad?
More books by this author More books in this series

During the 1980s Jon worked for Games Workshop as the editor and advertising manager of the White Dwarf and Warlock magazines.

Gary is a freelance illustrator. In the 1980s he worked for a while as the game development manager for Games Workshop, during which time he edited and illustrated the Talisman boardgame, which, for the next four years, was the best-selling fantasy game on the market.