Home>Browse>Books>Children's>What Does An Anteater Eat?

What Does An Anteater Eat? 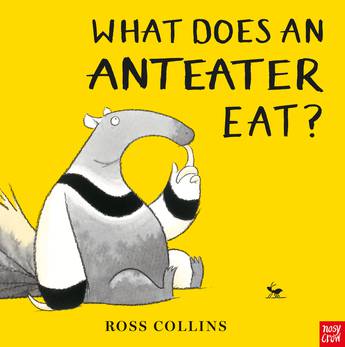 This anteater is very hungry, but what on earth does an anteater eat?

Anteater is hungry, but he has completely forgotten what anteaters eat. Baffled and with his tummy rumbling, he consults the other animals. But Sloth is too busy, Toucan is clueless, and Crocodile has his own mouth full. Maybe the ants will know - and maybe the answer isn't quite as obvious as you may think! A delightfully silly tale that little ones will return to again and again.
More books by this author More books in this series

Ross Collins's primary 1 teacher, Mrs Spears, told his parents that he should go to art school. 13 years went by until he was finally 'old enough' to get into the Glasgow School of Art. Can you believe that? - 13 years. On graduating he won the Macmillan Prize for his first picture book. Since then he's illustrated over 100 books for children and written a few of them too. Several of them have won enormous glittering awards which he keeps in a box in Latvia. Ross's book The Elephantom was recently adapted into a critically acclaimed play by those clever people at the National Theatre who made that War Horse thing. When he's not creating children's books he enjoys working on character development for animation studios like Laika and Disney. He also likes walking in the Scottish glens with his dog Hugo, who is an idiot, and his partner Jacqui and son Ridley, who are not.