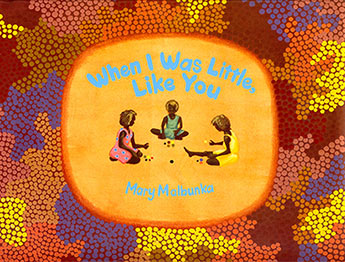 With evocative words and stunning pictures, Mary Malbunka tells her rich story of growing up in the early days of the Papunya settlement in central Australia, going bush with her family and learning about culture and life. A picture book for all ages.

As Mary Malbunka shares her stories of playing with friends, building cubby houses, climbing trees, collecting sugarbag, digging for honey ants, hunting for lizards, and learning about the seasons, animals and plants, she creates a vivid picture of a truly Australian childhood in which country - ngurra is life itself.

Warm and accessible, this is essentially an oral story, and it contains a number of words in Luritja whose meaning is explained in context and also within an extensive glossary. The book also interprets recurring symbols used in traditional Aboriginal painting.

'This beautiful work is a gift to children, education and reconciliation.' - Jackie Huggins AM, Co-Chair, Reconciliation Australia

'Mary Malbunka's story is simply bursting with details of her childhood in Papunya - the bush tucker and medicines, the animals, the sense of family and community, the Dreaming stories, the country itself.and the difficulties of fitting in to the white man's world. I'm sure readers young and old will find the vibrant picture it paints to be irresistible. It is also an important story because it helps Aboriginal people reclaim our traditional culture.' - Professor Lowitja O'Donoghue
More books by this author

Mary Malbunka was born in 1959 in what was at that time the Lutheran mission settlement at Haasts Bluff (250 km west of Alice Springs). Her traditional language was Pintupi/Luritja. Her mother also spoke Warlpiri. At the age of five, Mary and her family were moved to the new government settlement at Papunya (some 30km north of Haasts Bluff), where she spent most of her life. Mary Malbunka tells her own story of her childhood in When I Was Little, Like You.

Mary was a key member of the collaborative team of Anangu staff and students who worked with Nadia Wheatley and Ken Searle to produce Papunya School Book of Country and History. Her work included the cover and a number of the internal illustrations, both in traditional and western illustration style. Mary was also involved in discussions about the content of the written text, and was a member of Papunya School Publishing Committee. Sadly, Mary died in October 2004.