Where Are You, Banana? 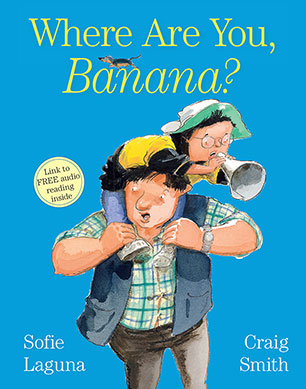 Roddy's dog, Banana, has disappeared! But when Roddy hears a wail from the drain, he finds an ingenious way to rescue his beloved pet.

'Banana! Where are you?'

Who will sleep on his bed at night? Who will pull him along on his scooter and chase Aunt Celia's chickens and chew Mum's shoes?

Banana is Roddy's best friend, and Roddy knows he has to find him, no matter what.

From two much-loved creators comes a warm and humorous story about a boy, a dog, and an ingenious rescue that will delight the whole family.

SOFIE LAGUNA has written several popular books for children and young adults (Bird and Sugar Boy, My Yellow Blankie, Too Loud Lily and Bad Buster). She is also an actor. One Foot Wrong was her first adult novel. She lives in Melbourne.

CRAIG SMITH is one of Australia's most prolific children's book illustrators. He has collaborated with many of Australia's best-loved authors, and his books include Cat, Billy the Punk, the Cabbage Patch series by Paul Jennings, several books by Doug MacLeod including Sister Madge's Book of Nuns and Where's Mum, and several books for Allen + Unwin including The Big Ball of String, The Boy Who Built the Boat and Heather Fell in the Water.

Listen to a Free Audio Reading