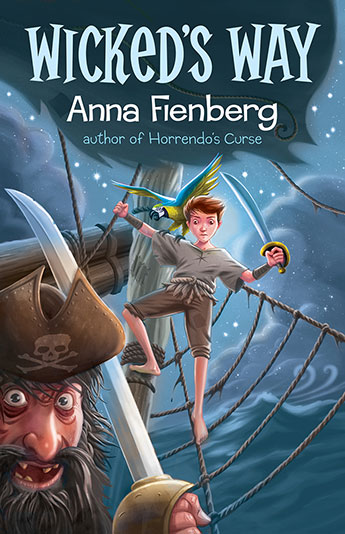 Anna Fienberg's fabulous new high-seas pirate adventure, with scoundrels and blaggards, devilish treachery, and pirates who long for a bit of comfort - great reading for 8 to 12 year olds from the world of Horrendo's Curse.

Will could walk a tightrope and juggle bananas as he went. 'One day you'll be the star of a circus,' his mother told him. 'But until then, you must be a secret.' For each year pirates came to the islands to steal young boys for their crew. And if that happened to you, well, you may as well kiss your life goodbye. So what's a young lad to do when his mother disappears and pirates arrive at his door?

Will takes courage from a crazy truth-telling parrot, and his mother's advice: 'Keep putting one foot in front of the other and your eyes on the prize.' But will this be enough to survive the perils at sea? And will that infuriatingly polite boy called Horrendo finally tip the balance?

A high-seas pirate adventure about scoundrels and blaggards, devilish treachery, and finding the most precious treasure of all.

Anna Fienberg is the author of many popular and award-winning books for children of all ages, including the Tashi series, Figaro and Rumba, Louis Beside Himself, Number 8 and Horrendo's Curse, which was an Honour Book in the 2003 CBCA awards.

Anna began writing stories when she was only eight years old. She says: 'I've always had a passion for words. I used to collect them, like some people collect stamps. Certain words gave me a special, billionaire feeling, and when uttered, seemed to have a magical effect.' She also gets her ideas from her dreams, people she meets and snatches of overheard conversation.

Anna was once Editor of School Magazine, where she read over a thousand books a year. She wrote plays and stories for the magazine, and then began writing her own stories. She has written picture books, short stories, junior novels, and fiction for young adults.

Wicked’s Way is another book from prolific author Anna Fienberg. The story of Will who is captured by pirates after his mother goes missing is another great tale from this author. The difference between this book and others I have recently read is that as the reader I was only in this for the story. I didn’t have my teacher hat on at all while I was reading this book. The story was so enchanting and captivating that I just read it to know what happened to Will. I found it hard to predict what would happen next and how the author would get Will out of his predicaments. While I was pleased with the happy ending some may not feel the same way but Will does not escape the author’s scolding for his behaviour but redeems himself at the end of the story. The character always had a good heart. It just got lost in badness for a while.

The reader will be challenged by the language and vocabulary of the book. Words like 'suppurating' challenge the reader but it is the language of the pirates with their abbreviations and use of different speech patterns and phrases that makes it interesting for the reader. A great touch to the book is the character of Doomsday, a parrot that Will finds later in the book. His supposed random words of wisdom are a nice touch to the development of Will’s character.

This book would be best used as a read aloud. Grade 2 boys would love to have this read to them with all the drama and excitement coming through a good story teller’s voice. Older students, both boys and girls, will enjoy it for what it is- a great rollicking adventure on the high seas.
Roxanne Steenbergen, New Town Primary, TAS

Wicked’s Way by Anna Fienberg can be described as a swash-buckling adventure that would certainly hook young readers. I found it hard to put down as I was swept away by Will’s story about growing up, overcoming his fears and learning the difference between right and wrong. Throughout the book, Will must deal with his inner battles which includes a sense of abandonment.

This book can be used in teaching as a study of some techniques employed by authors. For example, reference to the ‘black thing’ (his guilt) inside Will which grows and makes him feel physically sick. I could envisage older students discussing how this works as a clever literary device; while younger students could relate it to the unhappy feeling they might have themselves when they discover they have done something wrong. Another device Anna Fienberg uses is her reference to the main character as “Will”, then changes it to “Wicked”, then “Will” again as he journeys through the story. Older students could look at this in reference to Will’s character change and how we, as the reader, are affected by this subtle device. Younger students could be asked to come up with ideas of why the author does this (i.e. when he is happy and good he is called “Will” and when he acts like a pirate he is “Wicked”).

This is a story about personal growth, perseverance, love, treachery and piracy on the high seas, so it would appeal to a range of readers. I would recommend it for 9 year olds and up. You do not need to have read Anna Fienberg’s previous book Horrendo’s Curse to enjoy this one, but once you’ve read Wicked’s Way, you just might want to.
Kavita Davies, Ainslie School, ACT

Wicked’s Way by Anna Fienberg is a delight to read. The book demonstrates Feinberg’s self- confessed love of language and her social values. The novel begins with maps of three islands and the inviting opening sentence “Will Wetherto was born with a talent for the tightrope.” In only three pages, Will’s relationship with his mother is developed and her philosophy on how to approach both funambulism and life are developed.

Every child’s worst fear is realised: Will’s mother disappears. How can he manage this sudden independence and who will help him in the years ahead? “She was nowhere. There was nothing of her soft belly or her arms that held him so tight in the night. There was nothing to hold onto.”

The scenes created by Feinberg are vivid. The drama is described with a vivid vocabulary as are all the protagonists. Feinberg’s belief in the worth of the individual is revealed through the words of many, particularly the Wise Woman. “The Wise Woman told us that when it was most important, you would act with love and kindness.”
The book is suitable for better readers, due to its length and complex text.
Robyn Watson, Teacher/Librarian, Murray Farm Public School, NSW