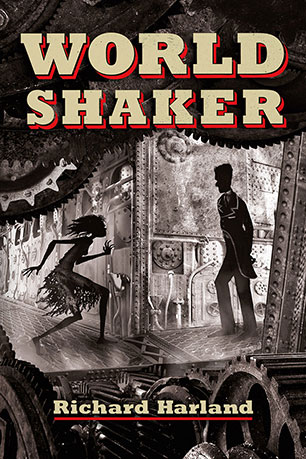 A brilliant fantasy that will hook you from the very first page, set aboard a huge ship-city in which the elites live on the top decks while the Filthies toil below. Strong writing, a vivid alternative world and characters you'll never forget.

Col lives on the Upper Decks of the juggernaut Worldshaker, a mobile city as big as a mountain. He has been chosen as next Supreme Commander - but then a girl Filthy escaped from Below appears in his cabin. 'Don't let 'em take me!' she begs.

Will he hand her over, or will he break all the rules?

Col's safe, elite world is about to fall apart.

'I loved Worldshaker! A claustrophobic setting of rivets, iron and steam, rustling silks and stiff collars and even stiffer manners; dark, twisting, bustling, brilliant. I was very, very glum when it came to an end.' D.M. Cornish

'I was captivated from the beginning.' Samantha, 15
More books by this author

WC Richard Harland was born in Huddersfield, England, and migrated to Australia in 1970. After several years as a singer, songwriter and poet, he became a lecturer in English at the University of Wollongong. He resigned to become a full-time writer in 1997. He now lives in Figtree, 80 kilometres south of Sydney.

His first book was the comic horror novel The Vicar of Morbing Vyle, which has since become a cult classic. In 1997 he began the Eddon and Vail series with The Dark Edge (followed by Taken by Force and Hidden from View), which combines a science-fiction world with detective thriller stories. His Heaven and Earth trilogy consists of Ferren and the Angel, Ferren and the White Doctor and Ferren and the Invasion of Heaven.

His most recent series is the Wolf Kingdom quartet.