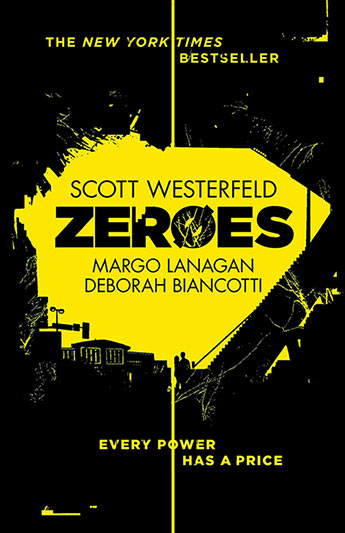 Ethan, aka Scam, has a way with words. But Scam isn't just a smooth talker - he has a voice inside him that'll say whatever people want to hear. But when the voice lies to a drug dealer, it lands Scam in a massive mess.

Nate, aka Bellwether, is the 'glorious leader' of the Zeroes - a group of teens with flawed superpowers that they haven't quite got control over. After Scam's latest mischief, Bellwether pulls the scattered Zeroes back together, and recruits a new member to their team. And soon the Zeroes find themselves entangled in an epic rescue mission, with life and death on the line.

Full of cinematic, high-stakes action, New York Times bestselling Zeroes is a brilliant mix of a superhero adventure and heist film.
More books by this author More books in this series

Scott Westerfeld is the #1 New York Times bestselling author of the Uglies and Leviathan trilogies. His novel So Yesterday won the Victorian Premier's Literary Award. Margo Lanagan has won four World Fantasy Awards for her short stories and for her novels Tender Morsels and Sea Hearts. Her work has also been shortlisted in the Hugo and Nebula awards and longlisted in the International IMPAC Dublin Literary Award and for the Carnegie Medal. Deborah Biancotti has published two short story collections. Her Aurealis-shortlisted Bad Power explored ordinary people discovering their superpowers. All three authors live in Sydney, where they are part of the overlapping communities of writers of genre and young adult fiction. They met weekly at a pub to keep the Zeroes series on track and squabble about characters' motivations.

As soon as I noticed that Margo Lanagan was one of the authors, I knew I had to have a copy of Zeroes. Written in collaboration with Scott Westerfeld and Deborah Biancotti the book did not disappoint. I hope the series is set to surpass the success of The Hunger Games, Maze Runner and Gone, et cetera.

While it abounds with the ingredients that are included in many YA novels such as superpowers, evil villains, captured protagonists, secret romances and fast-paced action as the young people attempt to right the wrongs of the world, the characters in Zeroes have far greater depths of personality, individuality and self-reflection. They realise their powers are sometimes more of a curse than a blessing and work hard to avoid becoming overwhelmed by them. These aren't the usual action heroes who run headlong into dangerous situations, though they meet them nevertheless in their attempts to save one of their former friends from both the criminal underworld and the law.

The story is told from multiple points of view - each Zero reveals his or her perspective on the action and the reader is propelled to keep reading by need to find out how each is faring in the fast paced incidents that combine to reach a nail-bitingly suspenseful, powerful and satisfying ending. And yet, we know this isn't the ending: the authors have established such an intriguing set of characters with many questions yet to be answered. How did they come by their powers? Nate is keeping dossiers on the other Zeroes and throws us occasional hints: they were all born in the same year. Will the budding relationships between the characters develop further now that they are once more a team? What situation will arise needing them to combine their powers again? Having read that each author is responsible for developing the motivation of two characters, my burning question is which author is responsible for which characters?

I predict that Zeroes will be very popular with those students from year eight upwards who enjoy books like Muchamore's Cherub series and Catherine Jinks’ Evil Genius. I am going to include it as one of the suggested texts for a crime fiction unit for year eight next year.
Pamela Powell, Network lead Teacher Literacy, Learning Services South Region, TAS

Zeroes, co-authored by Australian writers Scott Westerfeld, Margo Lanagan and Deborah Biancotti has been published after much anticipation. Many readers have found themselves now waiting for the next instalment in the series. I have finished reading the novel with mixed feelings.

The plot is unadventurous (for a novel based on a spiralling complexity of the pursuit of the protagonists by drug runners, incompetent bank robbers, Russian drug lords, the police), mainstream, and might even be considered uninspiring compared to what is available in terms of great contemporary Australian YA literature; it is certainly not of the calibre of individual works by the three authors. However, the collaborative nature of the writing process and the seamless integration of multiple authorship is innovative and mentally engaging; there is some constant wondering while reading the novel about ‘who’ wrote which chapters and developed which characters. What the novel does offer, though, is a diverse and interesting cast of characters who not only have fascinating superpowers, but also have complex and conflicting moral predicaments in relation to their possession and use of their powers.

Set in 2017 in the fictionalised city of Cambria, California (which is configured more like San Antonio, CA for its location, size and population demographics), the 6 main characters offer diversity in regards to class, gender, and ethnicity: three young women and three young men; a second-generation bourgeoisie Latino who aspires to political power; a Nigerian-African with exceptional technological skills and knowledge; a blind twin who uses other ways to see the world, a member of the underclass whose father has been imprisoned and is both a user and dealer of the drug desomorphine (Krokodil), the child from the educated class whose mother is a District Attorney, and a Zen devotee with a French first name. These characters have a refreshing cache of superpowers and their coming to terms with these powers across their childhood and into their futures is carefully spread across the 480+ pages of the novel.

It is my view that there are very few texts that are inappropriate for teaching and learning (though reading cohorts might be selected carefully for texts like this that involve violence and harrowing scenes of the effects of drug addiction); however, it is vital to focus on the continued development of critical literacies and offer students ways by which to interrogate texts for their cultural and social values at both explicit and implicit levels. In this regard, some questions that might be posed to students about this novel are:

Three Sydney based writers have teamed up to produce an extraordinary, compelling work of YA fantasy fiction. I was excited to read Zeroes, especially as one of my favourite writers, Margo Lanagan, author of one of my all-time favourites, Sea Hearts, is one of the team. I wasn’t sure how the team approach to writing would work. I wasn’t disappointed. Yes, there are three writers, but the work is seamless. The Zeroes are each blessed, or cursed, with a very specific, unique gift, an extra sensory power of the mind which allows them to act on the real world directly by using their gift. Yet each character is also a very real teenager, some of them naïve, all of them to a certain extent restless, looking for something, and not sure what that is. They have been brought together by the geography of where they live, held together by the gift and the will of Nate, the Fearless Leader, or Bellwether: and in the beginning, for some of them, their gifts as yet unrealised or underdeveloped. That is all about to change, with a harrowing, exciting roller coaster of a narrative which touches on the genres of crime fiction, fantasy, and even romantic fiction.

Although the primary focus of the overarching narrative is on the bringing together of these disparate characters with their, at times, seemingly conflicting gifts in order to develop a series, the first book hangs together well. I want to hear more from these characters and this team of writers.

The book would work well with teenagers of all ages, both boys and girls, from late Primary to upper Secondary. At 485 pages, it is a good, solid read. There are of course other characters, and for some, things do not go well. For Ethan, the character we meet at the start, there are moments when we teeter on the edge of wondering if he is mentally unstable. Zeroes could lead to discussion about friendship, family, leadership, morality, ethics, criminal behaviour, adolescence, team work, independence, mental health, love. There are also jumping off points for discussion about beliefs in ESP, fantasy, whether the mind could ever actually directly control the real world. In addition, the rich seam of working together with other writers to produce a single, cohesive work, provides areas for discussion and great models for Creative Writing.
Helen Wilde, SA