Boy Zero Wannabe Hero: The Curse of the Catastrophic Cupcakes 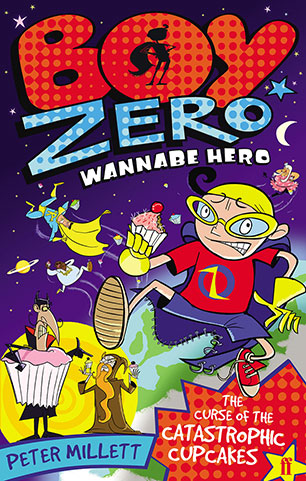 Boy Zero is in trouble. General Pandamonium has joined forces with Master Sushi and together they've hatched a plan involving some sinister cupcakes. Can Boy Zero resist temptation and save the day once again?

After twice being defeated by Boy Zero, the villainous General Pandemonium enlists the services of evil guru, Master Sushi, to help him achieve world domination. Together, the dastardly duo hatch a plan to rid the earth of humans by getting everyone to eat genetically modified cupcakes, which cause them to become weightless and float away into space.

Uncovering the sinister plot, Charlie Applejack rushes to the rescue. But his world is unexpectedly turned upside down when he too falls victim to the cursed effects of the catastrophic cupcakes.

With his powers in disarray, Charlie finds himself in a desperate race against time to take the General down, before everyone else on the planet gets taken up!

The third title in the hilarious illustrated series, perfect for fans of Captain Underpants and Ben 10.

Peter Millett was born in New Zealand. He was first published aged nine when one of his humorous poems appeared in the national press. He has since gone on to publish a great many children's books in New Zealand, including picture books and educational books. He has a passion for zany English humour and Spike Milligan is one of his all-time heroes. He lives with his family in Auckland.

Charlie Applejack is a super hero, albeit one who has little control over his powers. He lives with his younger sister, mother and father. His recent heroism has scored him an award as the Junior Superhero of the year. His acceptance speech is thwarted, much to his relief, as the escape of villain General Pandemonium is announced. This is the story of how Charlie saves the world from the evil General as he tries to get rid of everyone on earth through the invention of his special cupcakes. As he himself is infected by the results of having consumed these cupcakes, an interesting and rather smelly cure is found by his best friend Josh.

Boy Zero is a book that would be highly interesting to confident year three readers up to year seven. Boys in particular would enjoy reading this book especially if they like the Captain Underpants series. It would also be a good read aloud text for middle primary students.
Themes that are possible for this text could include heroes vs. villains, friends and family.
Kathy Hotz, Hercules Road State School, Queensland

Who doesn’t love a cupcake – especially one that actually claims to help you lose weight? The world is going made for them. The superheros can’t get enough of them – they’re really blown away by them. They are, actually blown away by them. The Zero G company is supplying the world with these amazing confections but who is its mysterious cupcake-costume wearing owner? Can they really be as good as they claim? When our hero Charlie Applejack, gets a birthday treat taste of these scrummy cakes he finds himself unable to keep his feet on the ground. Only a pair of borrowed deep sea diving boots can bring him down to earth and keep him there, and only the special gas releasing properties of baked beans can rid him of the gas that has caused his problem.

Who can be behind these accursed cakes? Who wants to rid the world of its superheros, in order to rule in his own evil way? Why, Snowflake of course (otherwise known as General Pandemonium) under the guidance of his new mentor, Master Sushi. Can our hero and his faithful sidekick, Josh, save the world again, or will these catastrophic cupcakes cause a complete calamity?

I love these fun books by Peter Millett. I laughed out loud – to my husband’s dismay. I would not hesitate to recommend this book to all fun-loving middle primary readers. Terrific!
Pam Sheppard, Mountain District Christian School, Victoria

It’s a bird…It’s a plane…no, it’s Charlie Applejack, better known as Boy Zero, a superhero whose powers don’t include making speeches or flying! But he has saved the world from the evil General Pandemonium twice – even if he’s a bit puzzled as to how…

This story is an easy to read, riotous and over the top take on the superhero genre, including caricatures of our usual favourites – a reluctant but likable hero who is yet to discover his superpowers, his loyal best friend, an evil megalomaniac and some good old-fashioned pokes at Eastern culture through the evildoer’s mentor, philosopher Master Sushi. And what would a book aimed at entertaining young boys be without fart jokes? Well, we don’t have to find out with The Curse of the Catastrophic Cupcakes, in a scene reminiscent of the fizzy lifting drinks in Roald Dahl’s Charlie and the Chocolate Factory.

Boy Zero is the story of Charlie Applejack – a young boy who has recently received an award for his superhero service to the community – he has defeated the evil General Pandemonium twice! Even if he’s not quite sure how…Little does he know that General Pandemonium’s goals are still there and his desires are as strong as ever (to control the world) but this time he has engaged Master Sushi to help him. Master Sushi has invented some amazing cupcakes that make people float off Earth, leaving it to the whims of its evil dictator. General Pandemonium is sure his time has come – but has he understood the Eastern philosophy? Has he, more importantly, underestimated the ability of our hero … to get lucky and not quite know how, again!

Boy Zero is like one of the cupcakes that forms its plot - light on substance, but enjoyable if you’re in the right mood, and guaranteed to be a hit with the kids. It has a predictable storyline but lots of laughs, especially when it comes to the relationship between the evildoers – Master Sushi and General Pandemonium. The power-hungry Pandemonium pitting his wits against the more patient Master Sushi who wants to model his evil is really worth reading. In the classroom, I would find Boy Zero a great book to encourage students to get interested in reading, especially younger, male readers. The book may remind them of cartoons or comics in the superhero genre, and the accompanying pictures may keep them interested. It is not a book I’d expect to see studied, though if it were discussed in class it could lead to questions about the superhero genre and the stereotypes portrayed: What do we see as “just” in a story like this, and whom did we end up finding more interesting – the villains or the heroes? Did Master Sushi come across as a villain or a hero? Did we ever have any doubts that Boy Zero would prevail, and why? Why not?

Peter Millett, a New Zealand author, has written another episode about Boy Zero Wannabe Hero (aka Charlie). Our superhero has defeated General Pandemonium before, but this time the General is sure he has come up with a foolproof way to conquer the world: feed the world’s population zero gravity cupcakes so that everyone floats off into space and he can have the whole world to himself! One of the first victims is Boy Zero and rather than wear lead boots forever, his friend Josh figures that if Charlie could get rid of his internal gas by farting, he’d be normal again. Hence the copious amounts of baked beans Charlie has to eat.

The Curse of the Catastrophic Cupcakes is pure silliness from start to finish. The plot is ridiculous and fast-paced. The characters make the reader laugh; there is even an Eastern Mystic named Master Sushi. His part is to advise General Pandemonium but his suggestions are ludicrous and his reasoning even more so. The book is aimed at boys aged six to ten. With only 117 pages and illustrations breaking up the text, it is a quick fun read. Steve May’s illustrations suit the comic style of the story, even though the book is not a graphic novel per se. The text itself includes plenty of breaks with the onomatopoeia in different bold fonts. I would use this book as a read-aloud; even girls would enjoy the humour or it could also be given to a reluctant boy reader to get him hooked onto a fun series to read.
Nova Gibson, Massey Primary School, New Zealand

What young boy wouldn’t love a book that refers to baked beans in the author note? Boy Zero Wannabe Hero is a new chapter book for younger readers by Peter Millett. In the third book in the series, The Curse of the Catastrophic Cupcakes, we find Charlie Applejack getting ready to receive his award for Junior Superhero of the year. The plot moves quickly, with Charlie finding out that his nemesis General Pandemonium has broken out of jail. With a villainous plan to use cupcakes to take over the world, it is up to Charlie aka Boy Zero to save the day.

The book is an enjoyable, fast-paced read. It is peppered with lots of humour and action, keeping young readers entertained. The characters all have wildly silly names that children will enjoy, such as Master Sushi and Moaning Panty Bum. The comic style illustrations add humour to the story and the ending leaves readers anticipating the next book in the series. The Boy Zero series will certainly appeal to children who have enjoyed the immensely popular Captain Underpants series. It would also be a great title to have in the classroom library or school library to encourage reluctant readers, especially younger boys. Boy Zero is a quick, fun read that my Grade 1/2 class really enjoyed as a read aloud. As my class enjoyed this book, I am looking into getting the other two books in the series, The Attack of the Brain-Dead Breakdancing Zombies and The Petrifying Plot of the Plummeting Pants.
Kathleen Temple, Yarrambat Primary School, Victoria