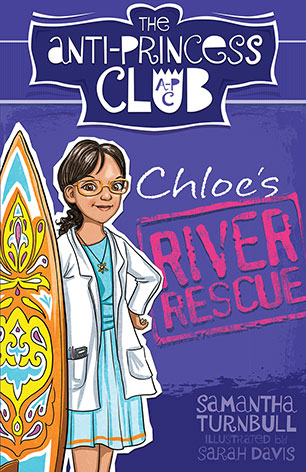 It's hard being a ten-year-old girl when everyone wants to turn you into a princess. Welcome to the lives of Bella, Grace, Chloe and Emily.

Talented ten-year-olds Emily, Bella, Chloe and Grace are sick of people treating them like helpless princesses.

Science star Chloe Karalis's favourite person in the universe is her grandmother - so she's thrilled when Yiayia comes along for a fab summer holiday with Chloe and her three besties. But when Yiayia goes missing on her daily walk, the foursome know that they're faced with their biggest mission yet. Can they combine their unique talents to rescue their beloved mentor?
More books by this author More books in this series

Samantha Turnbull is a multi-award winning journalist based in Byron Bay and working at the Australian Broadcasting Corporation. Her writing has been featured in publications including ABC online, the Canberra Times, Daily Telegraph, Northern Star, SHE magazine, Cosmopolitan and the Walkley magazine.

Samantha decided to get into kids' fiction when she was browsing the book section of a well-known department store and couldn't find anything for her daughter that didn't feature a princess or a fairy.

Samantha doesn't like stories about damsels in distress. She likes to read and write about girls who don't need rescuing.

The Anti-Princess Club books are her debut novels.

Emily, Bella, Chloe and Grace are 10-year-old best friends and they are the Anti-Princess Club. Dismayed that even their parents see them as pretty girls who will need rescuing by a “handsome prince” despite their individual talents and interests, the girls unite to show them they are strong, independent young women. There seems to be one set of rules for their brothers and a different set for them. As Bella says, “I don’t want to be a boring old fairytale princess. What do any of them even do, other than look pretty and get rescued by princes?”

Even though she herself is a neurosurgeon, Bella’s mum insists on buying and reading her fairytales even though Bella, who is a talented artist, would rather have the comics bought for her young brother. Emily’s mum is fixated on physical appearance while Emily is fixated on all things mathematical. Grace’s parents believe she should be a ‘lady’ and learn ballet and leave the athletics she loves and is very good at to the boys in her family. Chloe’s parents see her future as continuing in their Greek restaurant, not in the science that is her passion. The only person who seems to understand their frustration is Chloe’s yiayia who tells them of the frustrations she and her friends faced as girls in an even more conservative society and the secret club they formed. And so an idea is born, and when Emily’s mum enters her into the local beauty pageant the girls have their first mission…

This is a new series of four titles, each one focusing on trying to turn each girl’s parents and teachers away from their preconceptions about what girls should be and do so they can be who they are. Deliberately designed to challenge the status quo and provoke thought, discussion and even debate the series is intent on showing that there is more to life for this age group apart from the ‘princessification’ of their world. While it would seem that such a focus would be redundant in 2015, when we examine the world of the modern 3-9 year old it seems there is once again we have returned to an emphasis on looking and behaving like a princess. Perhaps this has been inspired by the Disney movies of several of the classic fairytales and young girls see themselves as the new Snow White, Cinderella, Aurora, Ariel, Belle, Jasmine, Pocahontas or Mulan - there's certainly enough merchandise to support their dreams - and the more practical, real-life world of girls has slipped by the wayside.

Determined to show her daughter that "there was more than one way to being a girl" when she discovered that even everyday items like babies’ nappies had princesses on them and deciding that wasn’t a healthy image to be projecting from the day she was born, journalist Samantha Turnbull decided it was time for something different, something that showed that girls could be strong, independent, confident, resourceful and empowered, and so she created the club whose motto is “we don’t need rescuing.”

This is not just a series for girls though – if we are to challenge and change the stereotypical thinking that is creeping back into our society, they need to be shared with the boys and their underlying message discussed. One of the critical aspects of being information literate is to be able to determine the author’s perspective and identify bias towards a preconceived belief that might shape their writing. Promoting this series of books as a class read would be a perfect platform to start an examination of widely-held beliefs and encourage our students to start questioning the status quo – just because something is common doesn’t mean it’s correct.

Big tick to Samantha Turnbull for creating more than just another series of stories for girls. Not only is this on my library’s shelves, it’s also in the Christmas stocking of Miss 9!
Barbara Braxton, Teacher Librarian, NSW