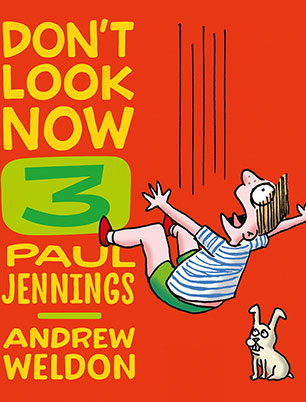 Ricky is desperate to impress Samantha. And he wants to be FAMOUS. The one thing he can't do is let her see him fly. But he's willing to try almost ANYTHING else to get her notice him.

A brilliant series presented in words and pictures by master story tellers Paul Jennings and Andrew Weldon. Don't Look Now will have readers laughing out loud at Ricky and his hilarious adventures - on and off the ground.
More books by this author More books in this series

Paul Jennings has written over one hundred stories and won every Australian children's choice book award. Since the publication of Unreal! in 1985, readers around the world have loved his books. The top-rating TV series Round the Twist and Driven Crazy were based on his popular short-story collections such as Unseen! In 1995 he was made a Member of the Order of Australia for services to children's literature and he was awarded the prestigious Dromkeen Medal in 2001.

Andrew Weldon's cartoons have been published in Australia and internationally, including in The Age, The New Yorker and The Big Issue. He has published two cartoon collections - I'm so sorry little man I thought you were a hand-puppet and If you weren't a hedgehog. If I weren't a haemophiliac. His most recent book is Lazy Daisy, Busy Lizzie, created with his partner, Mary Ellen Jordan.