How the Whale Became 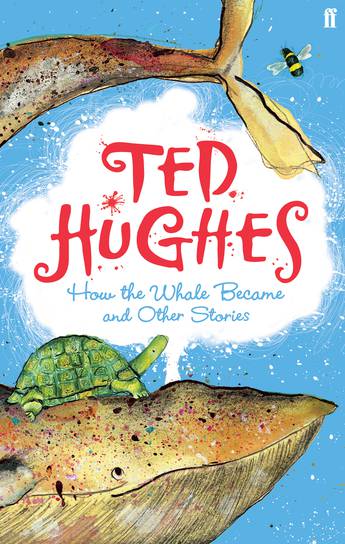 This collection of eleven evocative, accessible and funny stories for children of 5+ tells how a particular animal came to be as it is now. The Whale grew up in God's vegetable patch but was banished to sea when he became too large and crushed all His carrots; the Polar Bear was lured to the North Pole by the other animals who were jealous that she always won the annual beauty contest; the Hare has asked the moon to marry him but can never stretch his ears high enough to hear her reply; the Bee must sip honey all day long to sweeten the bitter demon that runs through his veins.each story is a delight for reading alone or aloud.
More books by this author

Ted Hughes (1930-1998) was born in Yorkshire. His first book, The Hawk in the Rain, was published in 1957 by Faber and Faber and was followed by many volumes of poetry and prose for adults and children. He received the Whitbread Book of the Year for two consecutive years for his last published collections of poetry, Tales from Ovid (1997) and Birthday Letters (1998). He was Poet Laureate from 1984, and in 1998 he was appointed to the Order of Merit.

Ted Hughes offers a range of 11 short stories to explain the way animals are the way they are. Included in his selection are the whale, tortoise and bee. Each story is only 7 to 10 pages long so are easily readable out loud in a session. This book is easy to read and understand. As the stories are short, they hold the reader’s attention. Each chapter is independent of the others so the book is able to be read over a period of time without having to remember what you are up to. Because they are short and complete they are very good for whole class reading and could be used as a springboard for writing activities as well. These stories are a good example of fables for older students. These stories are more suited to older students rather than younger ones as the explanations are more vivid and would not appeal as much to them. Students above Year Four would appreciate them more readily.
Kathy Hotz, Hercules Road State School, QLD

I was constantly reminded of my favourite childhood book, the Just So stories, by Rudyard Kipling while reading this small volume of Ted Hughes’ wonderful animal legends. First published in 1963, the eleven stories of how things came to be will evoke humour and a lasting interest in the idea of storytelling. Hughes, Poet Laureate from 1984 until his death in 1998, was one of England’s favourite poets and children’s author. And this book, How the Whale Became, exposes his considerable talent to a new audience.

The stories show the animals at the beginning of time, wondering what they will become in the world. Many try different things, until they hit upon the animal they should be. Readers will roar with laughter at the donkey trying to be a lion, an eagle, a bull and a cockatoo, all giving them five minutes each, before hitting on being a donkey. The whale grows up in God’s vegetable patch but in growing so large, squashed God’s carrots and so was banished to the sea. The polar bear is lured to the polar regions because it always wins the beauty contests and the other animals are jealous. And so on. Each creation story revolves a big issue, jealousy, independence, conformity, and each is fun to read aloud or in a group. Bordering on fables, the stories could well be used in a unit in the classroom on storytelling, or fables, or creation stories, or to introduce a study of animals, or just to have fun.
Fran Knight, South Australia

How the Whale Became is a whimsical collection of short stories with occasional illustrations. It uses easy language and is best suited to the middle primary years. They are written in a similar vein to Dreamtime stories and would make an interesting adjunct to these stories with scope for comparison. Many of the stories have a moral message which is also a good teaching point. Some of the stories mention God which would need to be taken into account when looking at the religious demographics of the class.

This book would provide many literacy activities such as information reports on various animals, language activities such as dictionary meanings and writing their own stories of how animals became. These stories lend themselves very well to children creating their own plays or using them for assembly items. Most stories in this book are short enough to be read before a break or as a lovely end to the day.
Rita Maguire, Warragamba Public School, NSW

How the Whale Became and Other Stories is a collection of short stories Ted Hughes originally wrote for his children and published in 1963. He has a simple yet lyrical style of writing. All the stories are on average seven pages long. I believe they are suitable for the upper age groups/maturity as the content contains trickery, death and pain as well as humour, comradeship and love.

The 11 stories are presented within the larger story of God making animals when the world is just brand new. Owl is a wretchedly opportunistic creature whilst Whale begins as an overgrown vegetable. God can be confused, make mistakes and is trying to work his way through. We read of fox and dog in competition to be man’s best friend and many more animals in inventive and new situations. In particular I like the fast moving, always winning turtle story and Bombo in how the elephant became, with that ever-true moral of “be yourself”.

The size of each story means the book can be read to class when a moment arises. The consistent size, style and language used means that the stories can be handed out to small groups to work on, translated or modelled. I work in schools of high multicultural makeup so it is important to advise the students that these are Ted Hughes’ creation stories alone, they do not represent a culture of ‘longer term’ believe. I feel these stories will set off lively story sharing sessions within the classroom, particularly pertinent to culture and community understanding.
Lillian Rodrigues-Pang, NSW

Faber have reissued this collection of Ted Hughes pourquoi stories almost 50 years after he dedicated them to his children Frieda and Nicholas. They have a ring of the spontaneous about them: a series of bedtime stories, perhaps, explaining the whys of the characteristics of certain animals. The animals have already been created, but they were not always how we think of them. Their behaviour changes them somehow, so that the once speedy tortoise has become the lumbering fellow we know, or the prone-to-sadness bee must seek joy by collecting the sweetness of the flowers.

The eleven stories are possibly a Hughes response to the Just So stories of Kipling. They are charming and quirky and short enough to be enjoyed as a class read aloud. God gets a look-in, possibly not in the way that some conservative Christians might think of Him (at one stage wearing a sun hat and feeling the heat — far more human than divine). These will be enjoyed by middle primary-aged students who just might be inspired to write their own.
Judi Jagger, Western Australia

This volume of Ted Hughes’s ‘creation’ stories was first published in 1963, and has now been published in paperback with a bright modern cover. There are eleven stories averaging eight pages each and each story tells of how and why a particular animal behaves as it does. The volume opens with the story of why the owl hides away during the day and only comes out at night. It is because he played a nasty trick on the other birds so that he could eat them as opposed to rats, mice and beetles. The other birds wised up and now every morning when they awake, they remember owl’s nasty trick and chase him into a hole. God, as creator, features in some of the stories. He found a whale-wort growing in His garden but as it refused to stop growing and flattened God’s house, whale-wort was pushed into the sea where he shrinks when blowing and grows again when sleeping; and thus is not allowed back in God’s garden.

Ted Hughes shows a great sense of humour and amazing imagination in telling these stories. They would appeal as bedtime stories for five to ten year olds and the adult reader would chuckle too. It is a memorable bunch of tales – I remember these being read to me as a child (many many years ago!) As a teacher, I am not sure the book would have enough appeal to be chosen off the shelf by a child. While the cover is bright, the inside lacks colour and is sparsely illustrated. However it is a great read-aloud and I would use it to stimulate children’s imaginations to write their own how/why animal stories.
Claire Cheeseman, Summerland Primary School, New Zealand