How to Save the Universe in Ten Easy Steps 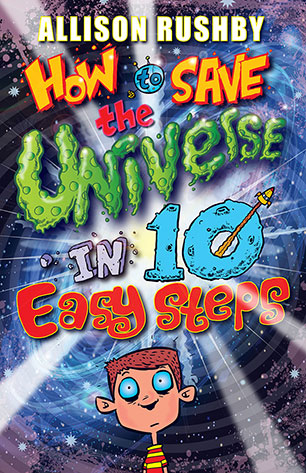 The whole universe is at stake in this comedy about a ten-year-old boy and his battle to prevent the end of life as we know it.

Cooper can't believe that he and Molly are related, let alone twins. They are so different! He loves junk food. She calls it empty calories. He likes to crack jokes. She was born without a sense of humour. He's busy making plans for his gross-out tenth birthday party while Molly would rather take their dog, Jack, for a healthy walk.

Their differences don't make sense. Until Molly tells him she's an alien who has been sent to protect Cooper and help him fulfil his destiny because one day he's going to save the universe. Cooper thinks Molly must be setting him up on some kind of prank TV show. Maybe she's got a sense of humour after all?

But then intergalactic bounty hunters arrive in Peregrination (population: 203) and strange things start happening to Cooper. Either he's crazy or he really is in danger. And if he is in danger, so is the universe .

Allison Rushby is the author of a whole lot of books, including the young adult novels Being Hartley, Blondtourage, Shooting Stars and the Living Blond trilogy. She is crazy about Mini Coopers, Devon Rex cats, Downton Abbey and corn chips. She can often be found on Twitter at @Allison_Rushby or on Facebook.