Knight's Tales: The Knight of Spurs and Spirits 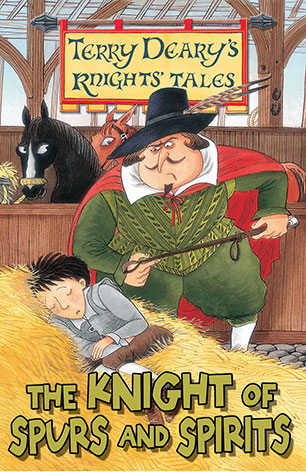 Another of Terry Deary's witty and wonderful tales of medieval knights.

The violent and cruel Sir Robert Hylton terrorises his servants in grand Hylton Castle. Whilst they suffer from cold, hunger and his temper, Sir Robert drinks wine and sits by the fire. When his violence goes one step too far, Sir Robert uses friends and influence to escape the law. But ghosts are known for following their own justice and Sir Robert will not find peace. This is an unusual tale, based on a real medieval knight, and full of Terry Deary's dark humour and dry wit.
More books by this author More books in this series

Terry Deary began his writing career with fiction for A+C Black. He has now written more than 140 fiction and non-fiction books which have been published in 32 languages. His historical fiction for older children, Tudor Terror, has been praised as a 'marvellous blend of fact and fiction' (School Librarian). His non-fiction has been consistently in the best-seller lists since 1994. His Horrible Histories celebrated their 10th anniversary in 2003, having sold 10 million copies worldwide and have been adapted as television animations, theatre tours and museum exhibitions. Terry Deary was voted 'Outstanding children's non-fiction author of the 20th Century' by Books for Keeps magazine.