Knight's Tales: The Knight of Swords and Spooks 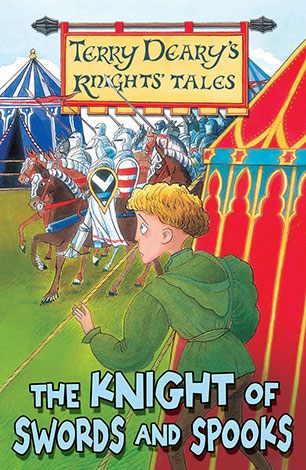 Another of Terry Deary's humorous and witty tales of medieval knights.

Young George is suspicious when his unloving father announces that he will be a squire to King Richard III. It is not long before he finds out that he is really a hostage to guarantee his father's loyalty to the king. After one failed escape attempt, George believes his tragic fate to be sealed. But he hasn't counted on the heroism of his faithful servant, Robin, who shows he will do anything to protect his young master. The king's allies are not so loyal and the future of England is about to change forever. This is an unusual tale, based on a real medieval knight, full of Terry Deary's dark humour and dry wit.
More books by this author More books in this series

Terry Deary began his writing career with fiction for A+C Black. He is now author of over 140 fiction and non-fiction books, which have been published in 32 languages. His historical fiction for older children Tudor Terror has been praised as a 'marvellous blend of fact and fiction' (School Librarian). His non-fiction has been consistently in the best-seller lists since 1994. His Horrible Histories celebrated their 10th anniversary in 2003, having sold 10 million copies worldwide and have been adapted as television animations, theatre tours and museum exhibitions. Terry Deary was voted 'Outstanding children's non-fiction author of the 20th Century' by Books for Keeps magazine.