Martha Mayhem and the Witch from the Ditch 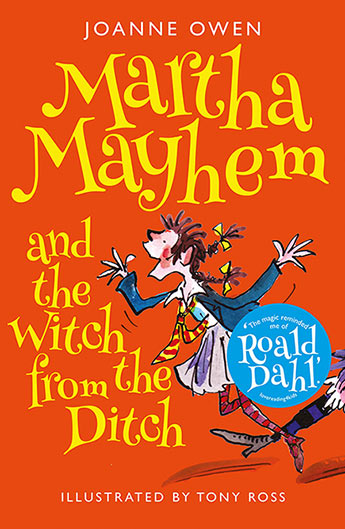 A laugh-out-loud magical story featuring witches and fun, the first in a series of three.

Martha Mayhem (real name Martha May) is always causing chaos! She just can't help it, somehow chaotic things just happen to her. Martha lives in the small village of Cherry Hillsbottom with her eccentric grandfather, Professor Gramps and her small pet hog Elvis. Life gets really exciting though when, on her way to school one day, she discovers a rather bedraggled-looking witch in a ditch. Griselda Gritch (the witch) tells a thrilled and alarmed Martha that she has accidentally let loose a ghastly ghoul that Griselda was trying to catch - and Martha is going to have to help her to get it back again! Griselda, though, is a rather grumpy and difficult accomplice. Can Martha, with the help of Gramps, Elvis and her best friend Jack (AKA Scrambled Egg Head), retrieve the ghoul and prove herself to Griselda? A brilliantly funny magical story, full of energy and action!
More books by this author More books in this series

Joanne Owen was born in Pembrokeshire, Wales, and read Social and Political Sciences with Archaeology and Anthropology at St John's College, Cambridge. Now living in North London, Joanne has published two previous Young Adult novels. Steeped in the atmosphere of nineteenth-century Prague, PUPPET MASTER blends the magic of marionette theatre with Czech folklore and legends. Described by The Guardian as 'timeless', PUPPET MASTER was longlisted for the Carnegie Medal and Branford Boase award and has been translated into several languages. Her second novel, THE ALCHEMIST AND THE ANGELS, is a fantastical historical epic set in sixteenth-century Prague, among the plague-ridden ghettos and decadent court of mad Emperor Rudolf. It was described by School Librarian as 'an imaginative tour de force'. Her third novel, the wonderful gothic tale CIRCUS OF THE UNSEEN, was published by Hot Key in 2014. The brilliantly magical MARTHA MAYHEM is her newest series.

Tony Rossis one of the most popular and successful of all children's illustrators. Born in London in 1938, he never thought he'd be an artist, but he says he 'fell in to it' when his dreams of being a cowboy fell through after John Wayne failed to answer his letter of application! Tony trained at the Liverpool School of Art, and worked as a graphic designer, as the Art Director of an advertising agency, and as Senior Lecturer in Art at Manchester Polytechnic. During this time he drew cartoons for magazines such as Punch. His first book was published in 1976. Tony has illustrated more than 800 books, and as well as drawing all of the fantastic pictures for the Horrid Henry story books, he has illustrated books for many other authors, including Roald Dahl, Michael Palin and Paula Danziger. He also finds time to write and illustrate his own books!