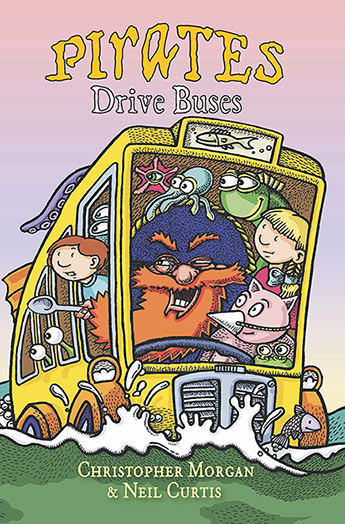 A bouncy, exuberant and crazy pirate adventure, in which Billy and Heidi find themselves helping a pirate recover his stolen ship. Along the way, they discover that monkey crabs are very tricky creatures, that a parrot-pig called Polly is full of surprises, and that pirates are very bad drivers.

'Oh, blow me pants down! Not monkey-crabs!'

The pirate is back, full of beans and with a busload of VERY unusual passengers. His ship, the SS You Beauty, has been stolen by the worst kind of ship stealer there is, and he needs Billy and Heidi's help. So, butter your bathers! Lift the seaweed anchor! Feather your swordfish! And get set for another crazy pirate adventure. But watch out - pirates are very, very bad drivers.

Magpies
More books by this author

Christopher Morgan became a writer because he broke his leg, and needed a job he could do at his desk. In the past, he has been a musician, a furniture maker and a public servant. Chris filled his desk with pictures of pirates and sailing ships, an old telescope and a treasure map, and started writing. Pirates Eat Porridge was his first children's book.

Neil Curtis drew from the time he could hold a crayon. He was an acclaimed artist, exhibiting both in Australia and internationally. Pirates Eat Porridge was his first collaboration with Christopher Morgan; his other books include the award-winning and much loved Cat and Fish and its sequel Cat and Fish Go to See (both written by Joan Grant) and his poignant illustrated memoir, The Memory Book. Neil received the Australian Writers' and Art Directors' Association's Silver Award for Illustration. He completed the artwork for Pirates Drive Buses just before his