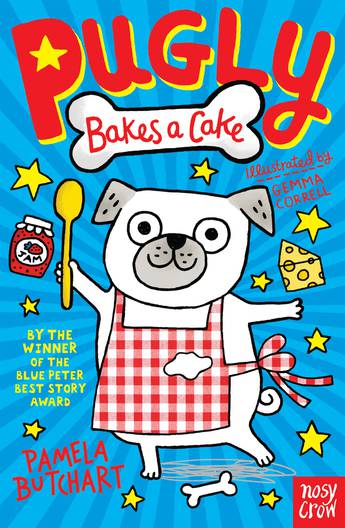 The first book in a hilarious new series about a little pug with some very big ideas!

Pugly is a pug with aspirations and dreams. While his owner is at school, he bakes cakes, builds space rockets and solves crimes. Things never go entirely to plan, though. Funny, sweet stories for 5 and 6 year olds.
More books by this author More books in this series

Pamela Butchart lives in Dundee, UK. As a child, Pamela was lucky enough to grow up in a house full of pets, have a mum and dad who were bonkers, and go to The Best Most Awesome Primary School in the World. As a student, Pamela's student jobs included: fishwife, teaching basketball in America, phlebotomist, and Artist Liaison for a (really bad) Abba tribute band. As a grown up Pamela teaches philosophy to teenagers and spends all day pondering questions such as, 'Is time travel possible?' and 'How do I know I'm not really a robot?' The stories write themselves really.

Gemma Correll lives in San Francisco. Gemma was born in Suffolk in 1984. She went to school, where she spent most of her time drawing, cutting out and sticking and making her own comics, and wearing 'My Little Pony' rollerskates. Twenty-four years later, she's still drawing, making collages and producing comics but, sadly, the rollerskates no longer fit. Gemma graduated from the Norwich school of Art and Design in 2006 with a BA (hons) degree in Graphic Design, specialising in Illustration. She now works as a freelance illustrator.

I guess we all know that pugs are pretty cute (and pretty fashionable) right now. If I hadn’t got a toy poodle myself I probably would have got a pug – although my eccentric teaching colleague who had a wardrobe of outfits for hers and attended all the ‘pug parties’ in Brisbane at one time did kind of put me off a little.

Moving right along, newly independent readers are going to love this book. It’s a HOOT! Last night I read this aloud straight through to The Divine Miss M who is having a sleepover and she thought it was great! She was able to predict and infer as I read which was pretty impressive as well.

Pugly and his rival Clem (Clementine) the cat are rivals for the undivided attention of their owner Maddy who is eight years old. Being a pug (no offence to pug owners), Pugly is not the sharpest knife in the drawer and Clem can very easily put it over him. Especially as Pugly’s only ally is Clive the fish – and Pugly doesn’t speak or understand fish-bubble.

Inspired Pugly decides he is going to the first dog to ever bake a cake and thus win paws down The Great British Bake Off, be on TV and meet the Queen (as you do when you’re famous). This plan will seal his status as Maddy’s favourite pet he is sure. However, with Clem ‘advising’ him chaos reigns in the kitchen and elsewhere, as Pugly heeds all Clem’s ideas, goes mental at the Evil Squirrel outside on the fence and more.

This is a laugh a minute book and not only proved a terrific read aloud (took about half an hour or so) but perfect for those readers beginning their individual reading journeys. Lots of capitalised words and extra-large fonts give them the opportunity to incorporate tone and expression into reading as well. Get onto this one – it will be a great favourite with Year 1 to around Year 4 for sure!
Sue Warren, QLD