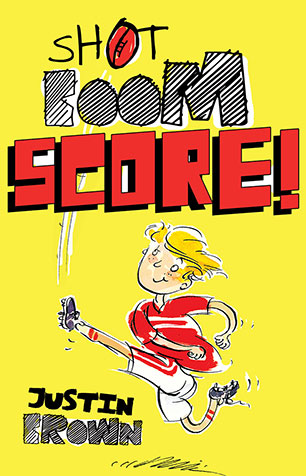 A hilarious story about a boy who is promised a Gamebox V3 by his dad if he scores 20 wickets in cricket and 10 tries in rugby, but is foiled at every turn by the class bully.

'Toby, if you get twenty wickets and ten tries before the end of the year, Mum and I'll buy you a new GameBox V3.'

Can you believe it? One minute I'm in trouble for double-bouncing my sister and the next Dad is telling me I've got the new GameBox V3! And it's not even Christmas. Shot!

Toby thinks this will be easy - after all, he gets Player of the Day all the time. But he hasn't reckoned on Malcolm McGarvy. McGarvy is one of the biggest kids in the school and he's got a huge scar which he got in a shark attack - he wears one of the teeth around his neck. You know McGarvy is near because you get goosebumps up your arms. And he's going to make sure Toby doesn't get that GameBox V3.
More books by this author

Justin Brown is an author, TV and radio host. He wrote his first book when he was seven (complete with ISBN number and recommended retail price) but waited a few more decades to publish UK on a G-String, the first of several successful travel memoirs. He has also written a number of books for children that have proved very popular in New Zealand schools, such as his Mike Cool-as-you-like series. All up, Justin has published 25 books (five of which are bestsellers in NZ). When he's not writing, Justin hangs out with his family, plays the ukulele, watches/ plays sport and tells bad jokes on his radio show.