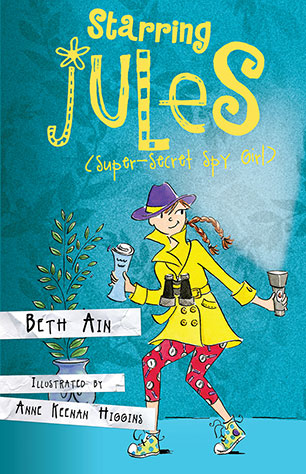 In this third hilarious chapter book about Jules Bloom, Jules has to be brave about her role in a movie -- especially in the face of Emma Saxony, who turns out to be a not-so-nice teen megastar!

3. Practise how to be stealthy, which means sneaky (which means not telling everyone every single thing that's on my mind).

4. Make good use of pen pals (even ex-best-friend pen pals can be surprisingly helpful in sticky situations).

School is out and Jules is hitting the road! She's off to Montreal where she'll film her first ever movie, The Spy in the Attic. But that means no friends around on her birthday and no birthday party. And with only a hockey player and diva starlet as cast mates in a town where no one speaks her language, Jules is feeling awfully lonely.

Good thing her best friend Elinor is sending super-secret spy missions to keep Jules busy. With a little stealth and a whole lot of gumption, she just might be able to turn her bummer summer into a blockbuster.
More books by this author More books in this series

Beth Ain was raised in Allentown, PA, but fell in love with New York City first as a little girl after hot pretzels from a corner stand warmed her up on a cold winter day, and again later, right after she knocked the mirror off of a city bus with her trailer the day she moved in. The driver quickly forgave her and she quickly decided it was the greatest city on earth. She did eventually head for the hills of Port Washington, Long Island along with her husband and two children, where small-town life has no shortage of inspiration, and where she can see the Empire State Building on her morning run - making it pretty easy to imagine what Jules is up to over there.

These are the third and fourth titles in the series featuring Jules Bloom, an eight year old with a passion for acting and the adventures she has as she tries to balance school with here after-school rehearsals for various television performances. The books move along at a very fast clip with all sorts of twists and turns that will appeal to young readers who aspire to this sort of life.

Jules is an appealing character who writes lots of lists so she “doesn’t lose track of the one million things that fly in and out of my brain” and even though her acting adventures take her into worlds that most girls her age would only dream about, on the whole she has all the dreams and fears that regular girls of this age have. She shares her room with her little brother and has a fluid collection of friends and all the other sorts of things that will make her real to her audience.

In Super-Secret Spy Girl school is out and she’s off to Montreal for her first ever movie which is very exciting but it means being without her friends on her birthday; in Third Grade Debut and things are much tougher than she imagined. Both stories have her using her ingenuity and resilience and having to draw on the superstar inside – inspiration for all our girls to do the same. They can find out more at http://www.bethain.com/STARRING_JULES_SERIES.html
Barbara Braxton, Teacher Librarian, NSW