The Imagination Box: A Mind of its Own 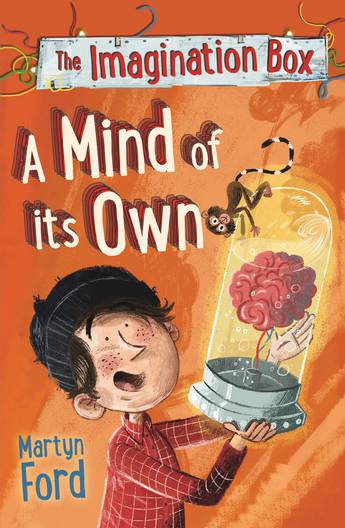 This stunning conclusion to the hilarious yet heartfelt Imagination Box series reinvents what it means to let your imagination run riot!

There was a sabre-toothed tiger in the playground. Wandering thoughts, Tim had come to realise, were extremely dangerous things. Nearly a year has passed since Tim, Dee and Phil the finger monkey (with the help of some fire-breathing bear sharks) defeated Wilde Industries and burned down the Imagination Space. But since then, it's become increasingly clear that there's something wrong with Tim. His imagination seems limitless - anything he imagines immediately appears in front of him, with no need for the imagination box. Which has good and bad consequences.

Then something truly awful happens. One day, Tim wakes up and realises that he's in his old orphanage. No one, not even Dee, knows who he is. He is completely alone - his worst nightmare. But he quickly realises who is behind it. His old enemy, Clarice Crowfield, has hijacked the power of the imagination box - and created a world where she is in charge! Tim must find Professor Eisenstone, convince Dee that they are in fact best friends (and, of course, recreate Phil) - and literally put their world to rights.
More books by this author More books in this series

Martyn Ford is a 28-year-old journalist from Hampshire, where he writes for the Bordon Herald. His first book, It Happened to Me, a collection of shocking true stories, was published in 2010 by Summersdale. In 2011 Martyn's TV script was in the finals of the BBC Laughing Stock Competition and he has since been in talks with the BBC about his writing. His debut, The Imagination Box, received huge critical acclaim, which was followed by The Imagination Box: Beyond Infinity. This is the final book in the series.