The Importance of Being Ernest the Earwig 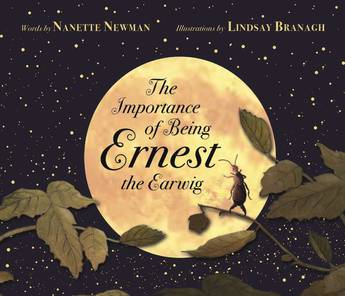 All sorts of creatures appear in books - rabbits, dogs, mice, and even ladybirds - but there are no earwigs! Ernest decides to put this right, with surprising and hilarious results . . .
More books by this author

Nanette Newman (Author)
Nanette Newman
Nanette went to RADA at sixteen, left at eighteen, married Bryan Forbes, (actor- writer-producer-director) and started on her career as an actress. She appeared in various films, including The League ofGentleman (1960), The L-Shaped Room (1962), The Stepford Wives (1975), and International Velvet (1978).

Her first venture into writing was a book of children's sayings called God Bless Love. It was a bestseller and profits went to the Invalid Children's Aid.
Nanette has also written several cookbooks and over 30 books for children.

Lindsay Branagh (Illustrator)
Lindsay Branagh studied Fine Art Printmaking at University followed by a Master's Degree in Set Design for Film and Television. After more than a decade working in the film industry Lindsay returned to painting and illustration - The Importance of Being Ernest the Earwig is the result.