The Names upon the Harp 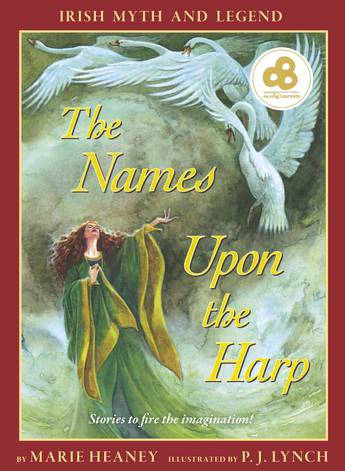 The heroes and villains of Irish myth and legend have fascinated generation after generation for over 2,000 years.

. . . There is Balor of the evil eye, whose very glance meant death; the wicked queen Aoife who turned children into swans; and Oisin, who followed his love to her city beneath the waves . . .Featuring beautiful colour illustrations by Irish Children's Laureate and twice Kate Greenaway winner P. J. Lynch, and a previously unpublished poem by Seamus Heaney, this is a stunning collection to cherish forever.
More books by this author

Marie Heaney was born in County Tyrone and began her teaching career in schools in Northern Ireland. She and her family moved to Dublin in 1972. As well as The Names Upon the Harp she has also written Over Nine Waves, an adult book of Irish legends and as an editor with Townhouse Publishing in Dublin has produced several anthologies, including Heart Mysteries, a personal selection of Irish poetry. Marie Heaney has also contributed to newspapers and journals and has written for radio and television.

P. J. Lynch has worked as a Children's Book Illustrator since leaving Brighton College of Art in 1984. He has won many awards including the Mother Goose Award, the Christopher Medal three times, and the prestigious Kate Greenaway Medal on two occasions. He is Ireland's new children's laureate. He lives in Dublin with his wife and their three children.