The Pearl-shell Diver: A Story of adventure from the Torres Strait 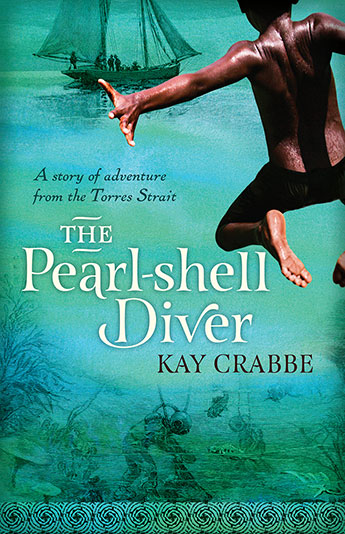 Engaging and authentic historical fiction about one boy from the Torres Strait trying to work his way up in the pearl-shell industry.

Sario lives with his family on a remote Torres Strait island, which he never wants to leave - but the winds of change are stirring. The year is 1898 and the pearl-shell trade is at its height. When his father is coerced to join a white trader on his pearling lugger, thirteen-year-old Sario must go to work as a swimming diver to support the family. He can earn more as a pump diver, and is excited by the idea of walking on the sea floor, but the competition is fierce, and the only captain who will take him on runs the worst outfit in the fleet. With the constant danger of shark attack and the storm of the century approaching, can Sario provide for his family and realise his dream?
More books by this author

Kay began her writing career with feature articles for newspapers and lifestyle magazines before moving into writing educational material for children. Her work in schools with reluctant readers spanned twenty-six years and prompts her to write history simply. Her interest in history was fostered when commissioned to write Patch Parker: Son of a Convict, now a recommended resource by the History Teachers' Association of Australia. Research into lesser-known history took her to Torres Strait and the tumultuous time of Federation. Other of her works feature animals and the environment, including the non-fiction book Introduced Species in Australia commended in the Whitley Awards by the Royal Zoological Society of New South Wales.

Kay grew up in Sydney and moved with her husband and children to remote areas of Tasmania and Western Australia before settling in Far North Queensland, where two spectacular environments meet: the Daintree Rainforest and the Great Barrier Reef.

The Pearl-shell Diver is set in the Torres Strait in 1898 and tells the story of thirteen-year old Sario, who is forced to work as a swimming diver to support his family when his father is coerced into joining a pearling lugger by a white trader. The work is dangerous with sharks presenting a constant danger and the conditions under which the divers work are appalling.

This is a thrilling, adventurous story with a fast pace which will appear to readers aged from about 9 to early teens. The characters are very-well drawn and believable, and the environment is vividly described. The author’s extensive research helps to create a vivid portrait of an important historical period in Torres Strait Islander society.

There are many ways this engaging text could be used in the classroom, but the most interesting, for me, would be to use it as the basis for an Inquiry Project on the Torres Strait Islands. I would start with establishing existing knowledge and then setting up a wonder wall of inquiry questions to research and answer. The project could be tailored to students’ interests and could include a focus on history, culture, exploration, the pearl trade, the pearl shell industry, the development of diving suits to modern-day SCUBA equipment, etc.

This is a fine example of historical fiction and includes useful text features such as a map, a Torres Strait timeline, glossary of the Mabuiag language and author’s notes. This could prompt a study of text types, comparing this with, say, a novel set in the modern day, or an historical novel set in Victorian England, for example, including an analysis of language, dialogue and place.
Anthea Barrett, Primary Teacher, DECV, VIC

A well-crafted novel for primary school readers that is both entertaining and informative. It reminded me of the Willard Price adventure novels I read as a child which I would read at one sitting. I cannot think of any other children’s novels that cover this particular part of Australian geography or history and primary school teachers would be highly recommended to purchase this title for their history fiction collection.

The novel is easy to read and the story exciting enough to keep the fussiest reader engaged throughout. The story is based on historical events in the Torres Strait Islands in the late 1800’s on a fictitious island. It gives a sense of the connection to land and culture that the Indigenous inhabitants had and also the massive changes for the traditional owners during this time.

I enjoyed this history and culture lesson very much and would recommend it to anyone who wants to know more about the early years of Australia. It is an action packed story with interesting characters and I do not hesitate to give it 5 out of 5 stars for content and readability and big thumbs up for the history lesson.
Gloria McCowan, Xavier Catholic College, NSW

The Pearl-shell Diver by Kay Crabbe throws light on an area of Australia that many people can name, but have very little knowledge. This is the Torres Strait- the stretch of water between New Guinea and Australia. A scatter of islands that have been visited by seafarers for centuries. The reader is taken into the lives of the saltwater people and given a rich insight into the family-oriented islands. Their language, customs and beliefs are all exposed in a story of survival, friendship and family love. The novel would provide an interesting vehicle for senior primary to junior high school students to explore the history and social intricacies of these people. The History syllabus (HT3-1) (develop knowledge and understanding about the nature of history and key changes and developments from the past) would be one outcome that could be met by the reading of this book. The other, is following the tale of Sario and the realisation that he alone possesses the ability to swim against the tide of change in an attempt to keep his family together. Some racial hostilities are exposed, but nothing that Sario or the reader will succumb to. This is a novel that needed to be written to expose the mainland Australians to their northern cousins.
Steven Marvell, Cranbrook Junior School, NSW

The Pearl-shell Diver is set in the Torres Strait around the time of Australian Federation. Crabbe describes in engaging detail the traditional life of 13 year old Sario. The simplicity of his traditional life, with most of the day being focussed on the catching and preparing of food and the making of tools, is key to understanding the vulnerability of this remote community. The mentioning of missionaries that came before give further insight into the gradual encroachment of western society and its values on these communities. The balance between traditional life and the white man’s ways is an ongoing source of conflict within the clans.

Islanders are hired to dive on the pearl luggers with promises of white man’s money but Sario’s two cousins have not returned from their lugger. The level of discrimination the Islanders are subjected to and the low value placed on their lives is thoroughly explored. They are force to dive long hours in dangerous conditions and are treated much worse than the Japanese divers on the boats.

The Pearl-shell Diver is suited to late primary or early secondary readers, but adults will also enjoy it. The audience is treated to a fast-paced book, experiencing the excitement, frustration and thrill of danger as they follow Sario’s journey. The novel would be well suited to a cross-curricular unit; Ausvels 5 History includes the examination of the daily life of Aboriginal and Torres Strait Islanders and how the environment changed. Crabbe has included a detailed glossary and a map to assist the reader.
Sue Nash-Skinner, Santa Maria College, VIC