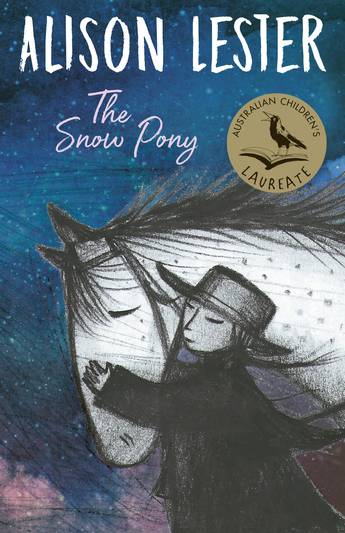 Only Dusty can ride the Snow Pony. And no one but Dusty will trust her.

Two years of drought have reduced the Rileys' farm to a dirt patch and strained the family to breaking point. A trip to the mountains to muster their cattle promises a fresh start, but sudden violence erupts into the peaceful landscape. Now Dusty and her beautiful brumby are tested as never before.

A tough and tender novel about a family's struggle to hold together during harsh times, and fourteen-year-old Dusty's faith in a wild horse they said could never be tamed.
More books by this author

Alison Lester grew up on a farm by the sea, and first rode a horse as a baby in her father's arms. Her picture books mix imaginary worlds with everyday life, encouraging children to believe in themselves and celebrate the differences that make them special. Alison is involved in many community art projects and spends part of every year travelling to remote Indigenous communities, using her books to help children and adults write and draw about their own lives.

In 2012, Alison became Australia's first Children's Book Laureate, a position she shared with Boori Monty Pryor. In 2016, she was awarded the Dromkeen Medal for her outstanding achievement in the creation of Australian children's and young adult literature, and in 2018 she became the first children's book creator to win the Melbourne Prize for Literature, for her outstanding contribution to Australian literature and cultural and intellectual life. In 2019, Alison was awarded an Australia Post Legends Award and featured on a stamp, as well as being the recipient of a Member of the Order of Australia (AM) in the 2019 Australia Day Honours List.