Theophilus Grey and the Traitor's Mask 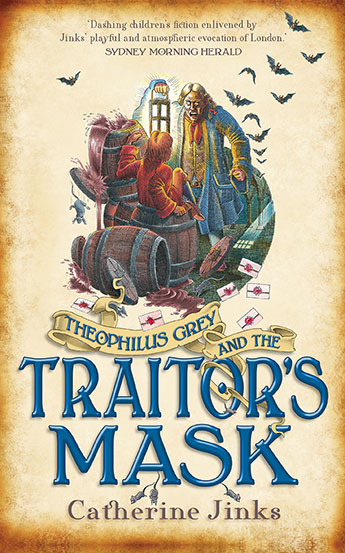 The companion novel to Theophilus Grey and the Demon Thief is a fast-paced adventure as Philo graduates from petty fraud and street crime to high-level political espionage.

You have too much honour for this trade, my dear. Abandon it now, while you still can.

In eighteenth-century London, twelve-year-old linkboy Philo Grey has spent most of his childhood out on the streets, collecting information to sell. One of his best customers, Mr Bishop, pays him good money for intelligence about the Jacobites, who are plotting to overthrow King George. But spying on the Jacobites is a dangerous business - especially when Philo becomes the target of a rival gang of linkboys. And then there's Philo's old master, Garnet Hooke, who's never forgiven Philo for leaving him. Garnet feels so betrayed, he'll stop at nothing.

Luckily, Philo has friends as well as enemies. He can trust his crew of linkboys, his team of informants, and his staunch friend Nathaniel Paxton, a surgeon with a background in espionage. Even his new friend, actress and master of disguise, Caroline Cowley, is a valuable ally. But with his enemies closing in, Philo has to ask himself: where should his loyalties really lie? And how far should they take him?
More books by this author More books in this series

Catherine Jinks was born in Brisbane in 1963 and grew up in Sydney and Papua New Guinea. She studied medieval history at university and her love of reading led her to become a writer. Her books for children, teenagers and adults have been published to wide acclaim all over the world, and have won numerous awards. Catherine's most recent titles include the multi-award-winning A Very Unusual Pursuit, Book One in the City of Orphans trilogy, the bestselling Evil Genius books, and her paranormal spoofs, The Reformed Vampire Support Group and The Abused Werewolf Rescue Group.